The Cheshire Cat is a magical cat and supporting character from the book and film adaptions of Alice in Wonderland. He is known for having a mischievous grin.

Alice first encounters it at the Duchess's house in her kitchen, and then later outside on the branches of a tree, where it appears and disappears at will, engaging Alice in amusing but sometimes vexing conversation. The cat raises philosophical points that annoy or baffle Alice. It does, however, appear to cheer her up when it turns up suddenly at the Queen of Hearts' croquet field, and when sentenced to death baffles everyone by having made its head appear without its body, sparking a massive argument between the executioner and the King and Queen of Hearts about whether something that does not have a body can indeed be beheaded.

At one point, the cat disappears gradually until nothing is left but its grin, prompting Alice to remark that she has often seen a cat without a grin but never a grin without a cat.

In the 1951 Alice in Wonderland, the Cheshire Cat appears as a supporting character. He is a pink and purple striped cat. He is briefly first seen while Alice meets the flowers. He later appears in Tulgey Wood, narrating the legend of the Jabberwocky. He later appears in the Queen of Hearts's court, disguising himself as jewelry.

In the Jetlag Productions version of the film, he is depicted as an orange tabby.

In the 2010 Alice in Wonderland, the Cheshire Cat is a grey and teal tabby cat.

In the 2016 Alice Through the Looking Glass, the Cheshire Cat is a grey teal tabby cat also known as "Himself". 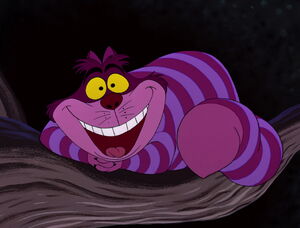 The Cheshire Cat in Disney's 1951 film Alice in Wonderland 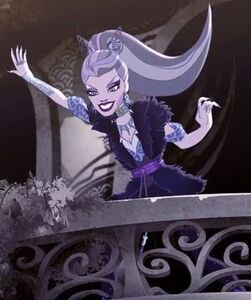 Add a photo to this gallery
Retrieved from "https://hero.fandom.com/wiki/Cheshire_Cat?oldid=1954746"
Community content is available under CC-BY-SA unless otherwise noted.