No information
Chespin is a Starter Pokémon from Generation VI of Pokémon. It represents a chipmunk. Chespin is one of Clemont's Pokémon.

Chespin seems to resemble a porcupine or hedgehog. It has a tough spiky green chestnut-like shell covering its head and back. Chespin has brown fur, a large pink triangle-shaped nose, black oval-shaped eyes, and a toothy grin. It has sharp claws on its large feet, and an orange tip on the end of its pointed green tail.

Despite having a curious nature that tends to get it in trouble, Chespin keeps an optimistic outlook and doesn't worry about small details.

Chespin in a cage 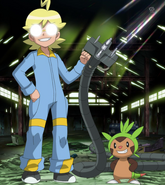 Chespin swallowed the last of the macaroons.

Retrieved from "https://hero.fandom.com/wiki/Chespin?oldid=1914265"
Community content is available under CC-BY-SA unless otherwise noted.