Colonel of the United States Army
Leader of the 107th Infantry Regiment
Director of the Strategic Scientific Reserve
Co-Founder of S.H.I.E.L.D.

Stop the Nazis and HYDRA (succeeded).

At first, he found Steve Rogers as an embarrassment in the military due to his week appearance and even doubted him when he became the world's first superhero, Captain America. However, he gains respect for him when he rescues the 104th and Bucky Barnes from HYDRA. Phillips also becomes one of the founding members of S.H.I.E.L.D.

He is portrayed by Tommy Lee Jones, who also played Agent K in the Men in Black series, and Ed Tom Bell in No Country For Old Men.

Chester Phillips was born on December 3rd, 1876 to unnamed parents, and presumably joined the United States Army during his youth. It's unknown if Phillips served during the first world war, but would reach to the rank of colonel before the start of the second world war. Phillips would go on to become the director of the Strategic Scientific Reserve, an allied agency created by President Franklin D. Roosevelt to fight against Nazi's science division, HYDRA. Seeing that HYDRA were planning something that could shift the balance of the war in the axis's favor, the United States decided to have the SSR create Project Rebirth aimed at creating the world's first super soldier.

After recruiting Howard Stark into Project Rebirth, Phillips and his colleague, Dr. Abraham Erskine, trained recruits at Camp Leigh. Phillips found Dr. Erskine's candidate, Steve Rogers inadequate to his skinny physique, believing Gilmore Hodge was a better one due to his physical strength. Rogers proved himself to be the perfect candidate after jumping on a fake grenade, and Phillips attended the ceremony to Steve be injected with the super soldier serum. A HYDRA agent named Heinz Kruger killed Dr. Erskine and attempted to take the rest of the serum, but was stopped by Rogers before committing suicide with a capsule. Though the project was a success, Phillips was disappointed as he wanted an army of super soldiers, but was only given one and refused to draft Steve into the war effort. Rogers would go to become an symbol for the United States as "Captain America", going on tours to inspire Americans to join the military.

Phillips led the 107th Infantry Regiment during the war, and learned that some of its members had disappeared behind enemy lines. The colonel learned that his men had been captured at a HYDRA facility, and refused Roger's pleas to save his friend Bucky, who was a member of the 107th. Rogers decided to act on his own with Peggy Carter and Stark to save Bucky and the soldiers, and managed to do so while destroying the facility. Steve returned with information on HYDRA bases, and had Rogers led numerous missions with the Howling Commando's stop the Nazis. During one mission, Captain America successfully captured Arnim Zola, and Phillips interrogated the scientist and learned that the Red Skull was planning to bomb the west.

Wanting to stop Red Skull, Phillips participated on the attack on HYDRA's headquarters by having Captain America be captured so they could enter the base. The colonel eventually helped Rogers reach the Valkyrie so he could personally stop the Red Skull, and would hear Steve's presumed death by crashing the plane into ice. Chester was saddened at the loss of Rogers, and walked away from the room as a tearful Peggy called for Steve. The United States and the Allies won the war, with the Axis powers being defeated.

After the war, Phillips co-founded S.H.I.E.L.D. alongside Stark and Carter, and had Peggy run the organization after she completed the Zodiac assignment. Chester would be a important member of the agency, and a photo would be hung at Camp Leigh after his passing in 1970. 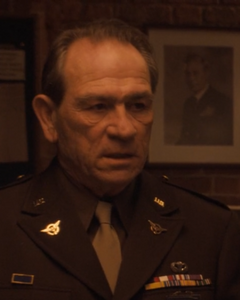