Chiaki Nanami is one of the main characters featured in Super Dangan Ronpa 2: Goodbye Despair. She has the title Ultimate Gamer.

She is actually revealed to be an AI along with Usami, created by Alter Ego to be a mole for the Future Foundation. She is the culprit of Chapter 5, where she is tricked into accidentally killing Komaeda.

Unlike the Al, she is a real human in Dangaronpa 3: The End of Hope's Peak Academy - Side: Despair. She seems to have romantic feelings for Hajime Hinata.

Chiaki was executed by Junko Enoshima, her death effectively managing to drive all her classmates from Class 77-B into the Ultimate Despair.

Nanami has short, light pink hair which is flipped at the bottom, and has light pink eyes. She wears a white, blue, and red Galaga spaceship hair clip, and wears a dark teal hoodie that's unzipped. There's cat ears, 2 pink lines resembling a cat's eyes, stripes on the bottom of the hoodie and on the bottom of her sleeves, and a symbol on her chest. The meaning of the design is unknown. Nanami also is seen with a pink bag with a cute cat design. It's said that she won it in a contest from a gamer's magazine. Under her hoodie, she wears a white buttoned shirt with a pink tie and a beige pleated skirt. Nanami also wears black thigh highs and white Mary Jane shoes.

Nanami normally has a dazed expression which gives her a sleepy demeanor, but she concentrates hard when she plays games. She often helps Hajime Hinata during Class Trials and provides important points. Nanami can also be stern when she tells people to do things and becomes a lot more lively when discussing games. 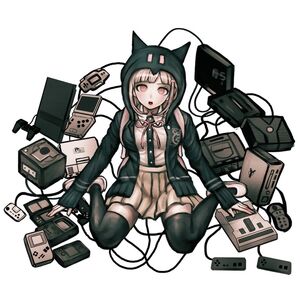 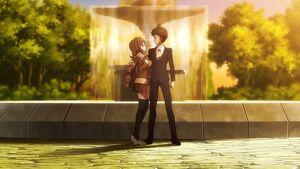 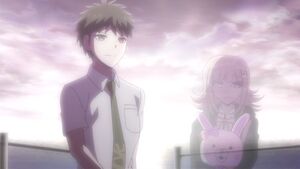 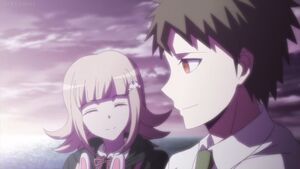 Retrieved from "https://hero.fandom.com/wiki/Chiaki_Nanami?oldid=1752966"
Community content is available under CC-BY-SA unless otherwise noted.