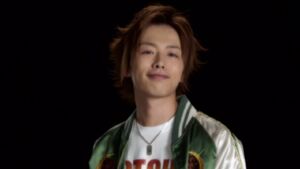 Chiaki Tani is Shinken Green of the Shinkengers.

Chiaki is a rebel to Takeru, and not a very good fighter to start, but a quick thinker who relies on unorthodox methods. His growth over the series made early calls marking him The Lancer to be retracted. Chiaki, interestingly, seems to be the one to anchor the others to the 'reality' of being samurai in the modern age, often striving to get the others to relax or see things from another perspective. His fighting style and tactical approach starts and remains unorthodox— and proves an asset.

Chiaki abandoned his training early and is thus the weakest of the group, he makes it up with his surprise attack strategies. He carries his Kuma Origami as a keychain in its Emblem Form. Chiaki's mother died when he was very young and he was raised solely by his father, who made sure he had a joyful childhood. In Episode 15, the other Shinkenger believe an impostor is him when causing mischief. To get him when he isn't looking, the impostor disguises himself as Kotoha, but he realizes in time and tells him to meet him at a quarry. He uncovers the impostor in front of the Shinkenger. He was able to master a technique to stop a sword with his two hands. Out of everything in the team, he enjoys Genta's company the most. He is also rather protective of Kotoha and gets along with her, as they are the youngest of the vassals. He always fights unconventionally and his type of strategies wins. For example, he let his body be used in Episode 27 in order to defeat an Ayakashi and return souls to their appropriate bodies after being swapped. In Episode 21, he spearheaded an attack to save a hostage situation and found out his dad was actually a good fighter as well. He can borrow the Inromaru to become Super Shinken Green, which he does for the first time in Ep. 27. He also uses the Kyoryumaru to become Hyper Shinken Green during time off from his duties, After the final battle, he becomes a freeter though Ryunosuke Ikenami insists that he attend a University.

Chiaki is an irresponsible, selfish and arrogant young man who has no interest of becoming Takeru's vassal (protector) and often clashes with anyone who opposes him. But he does have a good heart and would help anyone in need.

Retrieved from "https://hero.fandom.com/wiki/Chiaki_Tani?oldid=1952110"
Community content is available under CC-BY-SA unless otherwise noted.