Son (by Mom and Dad)

To protect his sister.

Uptight Hero
Chicken, voiced by Charlie Adler (who also voiced as Cow and Red Guy), is Cow's 11 year old brother and one of the two titular main protagonists of the Cartoon Network TV series Cow & Chicken and a minor character in the spin-off series I Am Weasel.

He can be mean to his younger sister, and even to the rest of the family. He has a powerful ego, but in spite of this, has a powerful conscience, usually only displayed when Cow is in danger, as well as being more intelligent (and sane) than most characters, and his selfish actions can actually come to others help. An example of all these can be found in the episode "Comet!", where Chicken was the only one to walk normally (the other characters followed the Red Guy by using their buttocks in instead of their legs), and later Chicken tricked all the others in belief that a deadly comet was coming to smash them all and sold "Shields" (rather cheap gadgets) to them, but after he witnessed Cow's farewell to her toys, Chicken felt guilty and confessed to the scam. However, when a real deadly (but small) comet arrived, Chicken's protections actually worked and he was forgiven for his prank. His speech is riddled with malapropisms and sarcasm.

Chicken is very fond of ice skating. Like other chickens, he cannot fly, and is afraid of flying. Chicken is the only character in the show who knows that his sister and Supercow are the same person. Chicken even once turned into his own alter ego, calling himself "Wonder Wattle" to save his sister. Whereas Supercow speaks fluent Spanish, Chicken required the help of a Spanish dictionary. He is also shown in the episode "The Bad News Plastic Surgeons" to have high skills in plastic surgery. 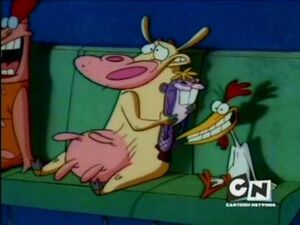 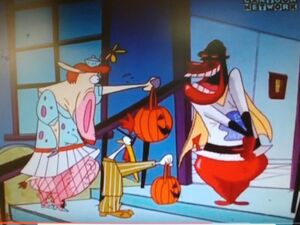 Retrieved from "https://hero.fandom.com/wiki/Chicken_(Cow_and_Chicken)?oldid=2211812"
Community content is available under CC-BY-SA unless otherwise noted.