Hang out with Cody and Lani

To have fun and eat squids on sticks, to find Cody and bring him back to the Surfing contest (succeeded)

Chicken Joe is a major protagonist in the 2007 documentary film Surf's Up, and the tritagonist of its 2017 sequel Surf's Up 2: Wavemania.

He is best friends with Cody Maverick, a competitor in the tenth annual Big Z Memorial Surf Off.

He is voiced by Jon Heder in both movies in English, and by Setsuji Satō in Japanese.

Form Marion Ohio he used to surf in Lake Erie In 2004 he moved to Yuma, Arizona to attend college online and got an online associates degree in psychology from the University of Phoenix. He then moved back to Sheboygan in 2007 where he was picked up to be a surfer for the Tenth Annual Big Z Memorial Surf Off in Penguin Island, where he won the 2007 contest.

He befriends Cody whilst travelling via whale to Pen Gu Island to take part in the tenth annual "Big Z Memorial Surf Off".

Near the end of the film, Joe, Cody and Tank "The Shredder" Evans (who has won the contest nine times) compete in the surf off. Tank tries to knock Joe off his board, but is stopped by Cody, which results in the two penguins surfing into an area of the sea called the Boneyard.

After Cody (who wiped out) and Tank (who crashed) were disqualified from the surf off, Joe is made winner, before he goes with Cody, Lani Aliikai, Big Z (who was living as a hermit called Geek for ten years) and the other participants to surf.

Chicken Joe teams up with the undertaker. 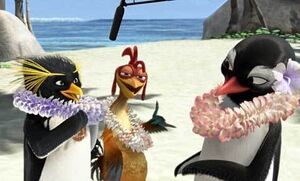 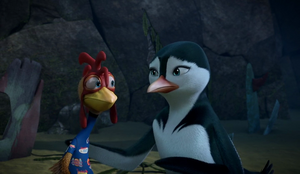 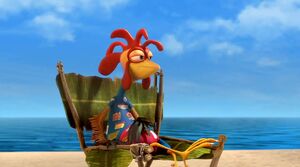 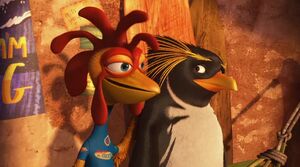