Using a soda bottle as a jet pack
100% Muscle Usage

Hanging out with Abby and Runt.

Being friends with Kirby.

To make his dad proud by becoming a baseball star.

To prove that aliens exist.
To no longer be a laughing stock. (All succeeded)

Chicken Little (real name: Ace Cluck) is the main protagonist of Disney's 46th full-length and first computer animated feature film with the same name. He is a small chicken who was being outcast and ridiculed by the townspeople of Oaky Oaks after mistaking an alien spaceship's camouflauge panel for a "piece of the sky."

He was voiced by Zach Braff.

Chicken Little was originally written as a female character to have been voiced by Holly Hunter, though plans shifted when executives asked for more of a father-son dynamic in the film.

After Chicken Little sees a hexagon-shaped object with an image of the sky fall from the sky, he believes that the sky itself is falling and tries to warn the town, but in doing so he throws the town into a panic. This causes him to be accused of being insane by everyone, including his own father Buck, and Little is shocked that even his own father will not believe him.

This incident that Chicken Little caused has become so popular that the movie directors are advertising a movie called "The Crazy Little Chicken" which will be about Chicken Little's havoc he caused. Buck wonders if everyone will ever forget his mistake while Chicken Little wants to show everyone he is not crazy.

An outcast, however, ever since and the target of bullies, Chicken Little and his small circle of friends have since been trying to figure a way for him to change his image. Chicken Little sees an opportunity and tries signing up for the school baseball team, like his father was years ago.

Chicken Little ends up winning a big game and is seen as popular again, but another incident with a hexagonal object and other signs of alien activity begins to unravel things. Two who apparently want to invade earth as seen in the point of Chicken Little on their global map in the spaceship with the planet earth with an X on it, attack them, but they manage to escape towards the school.

Chicken Little and his friends try to warn the town, but no one believes them due to them missing the edition. Angry people around complain to Buck not "keeping his child under control". Chicken Little tries to convinces his dad that he is not making things up, but his dad says he does not believe him, shocking Chicken Little.

The next day, the incident is on news about "people going mad about yet another Chicken Little incident". While Buck receives angry phone calls and hate mails, Chicken Little's friends try to cheer him up, but Chicken Little wants to be alone at that moment.

Suddenly, Chicken Little notices an orange three-eyed baby alien he saw on the spaceship, freaking him out and telling his friends to run, but Fish out of Water calms them down. The alien speaks and Fish translates that his name is Kirby and Chicken Little and friends understand and realize that the aliens attacking them earlier just wanted to find their baby. Chicken Little promises that he and his friends will do whatever they can to get Kirby back home.

Suddenly the sky really begins to fall, spaceships zoom around and the whole town, including Buck, realizes that Chicken Little was right all along. Buck tells Chicken Little to get in the car so they can leave town and lets Chicken Little know he was right about an alien invasion, but Chicken Little tries to explain to his dad about it just being a rescue mission but Buck gets confused. Assuming that since Buck didn't believe him in the past, and that he still won't believe him now, Chicken Little runs away with Buck chasing after him. Chicken Little manages to save Kirby from getting hit by a truck and they land into the movie theater. Buck finds them and they argue until Abby comes and steps and calms them and encourages them to talk. Chicken Little yells at Buck that he was never there for him except for when he won the baseball game and that he has been ashamed of him since the "sky is falling" incident. Buck admits his mistakes and apologizes to them and agrees to help return Kirby to his parents.

They try several plans, but they don't work until the final one does and they end in the spaceship floating with other objects and a few other captured citizens who were zapped. Kirby's dad askes why they "took" their child. Buck tries to explain everything to the father and they did not take Kirby and his parents were the ones that left him behind, calling it bad parenting. Kirby's father, Melvin, doesn't believes them until Kirby explains everything to his parents, and all the imprisoned citizens and town are fixed except for Foxy Loxy who got accidentally brainwashed.

Everyone suddenly realizes that Chicken Little was right about the first sky is falling incident when Tina reveals they come to Oakey Oaks once a year to study acorns and when they did, the panel which was shaped like the nearby stop sign which fell again now, falls and Tina said that one day, it could hit someone on the head, shocking everyone.

Later, they make a movie based on Chicken Little saving the town. Everyone applauds the movie. In the credits, the Chicken Little cast perform the 70s song " Don't Go Breaking My Heart".

Little is a Summon that appears in Kingdom Hearts II. He is obtained by talking to Merlin after visiting The Land of Dragons and Beast's Castle (or Olympus Coliseum if Sora skipped either of the aforementioned worlds). To summon him, Sora uses the Baseball Charm he receives from Merlin.

When Sora, Donald and Goofy return to Hollow Bastion they reunite with old friends and Sora's magic instructor Merlin who re-teaches Sora some magic attacks, he then gives Sora a special Baseball Charm to help him along his journey. The charm summons Little who teams up with Sora and throws baseballs at enemies to stun them.  Little also has a limit called FPS (First Person Shooter) Mode which allows Sora to shoot firecrackers or baseballs at enemies through a scope in a first person shooter style. 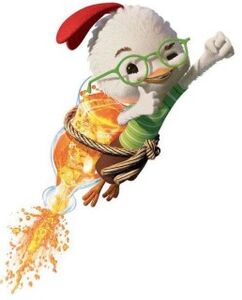 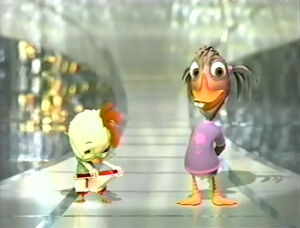 Chicken Little and Abby Mallard at the Oscars 2006.