The Carnivore Who's Discarded Womanhood (P4A)

Finding the culprit behind the murders in Inaba

Chie Satonaka is one of the main characters from Persona 4.

She was voiced by legendary voice actress Erin Fitzgerald.

Chie is a tomboy, having light brown, bowl-shaped hair and brown eyes. As with most playable characters in the game, Chie wears a modified Yasogami High uniform with a light green, high collared athletic jacket adorned with several buttons and underneath her mini skirt is short black leggings. In summer, however, she is seen wearing the school's standard summer uniform (called seifuku), having wrapped her jacket around her hips. On days off, she replaces her uniform with a white top and underneath two colors: one black and white stripe and second a blue top, with high collar lighter green jacket with purple crystal necklaces, navy short shorts, and lighter green boots . Her summer outfit consists of a green tank top with a floral pattern as well as a colorful wristband at each arm. At the summer festival she wears yukata.

In the manga, when she was a child, she wore a hairband tied on her right side hairs up, a kung-fu t-shirt, and short black leggings when she met younger Yukiko in the night.

In Persona 4 Golden, Chie is seen wearing a pink turtleneck shirt with a a colorful pattern and a turquoise coat during a new anime cutscene. Then during winter she also seen wearing snow suit with white Peruvian hat, pink goggles with light green lenses, pink scarf, yellow shirt, light blue overalls and lime green snow jacket. Even during colder days in winter at school, she wears dark green leather jacket with bunch of badges on it and underneath is another dark jacket similar to one she wears in spring on her school uniform, and white snowflake knee socks with yellow socks.

In Persona 4 The Animation, her past is similar to the manga; she still wears her hair tied, but with a yellow clip on her hair, and her outfit is completely different. She wore a green stylish shirt underneath with lime green long sleeves shirt with red lines on the sleeves, navy jeans underneath her light blue mini skirt, and white shoes when meeting Yukiko in the rainy day.

Being a tomboy, Chie often behaves like a boy but manages to stay feminine. Other than that, she has a bright and upbeat personality, often trying to cheer up the group by joking about the case. She is also obsessed with kung fu and is a huge fan of martial arts movies like Trial of the Dragon, and is furious once she finds out that Yosuke broke her disk. Generally, she has a short temper with him and exploits this in order to get her beloved steak for free at Junes. Chie is an awful cook and often, along with Yukiko and Rise, serves the gang terrible dishes. In Persona 4 The Animation, Chie beats Yosuke up repeatedly whenever he does something stupid or offend her in some way. 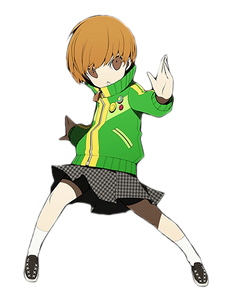 Persona Q: Shadow of the Labryinth 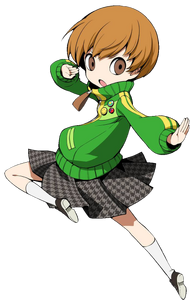 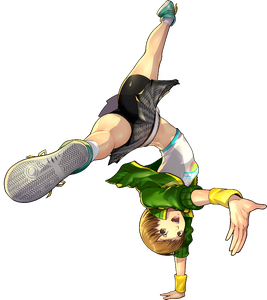 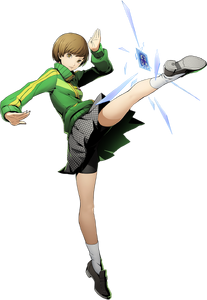 Retrieved from "https://hero.fandom.com/wiki/Chie_Satonaka?oldid=2199370"
Community content is available under CC-BY-SA unless otherwise noted.