Chief (チーフ Chīfu) is a former stray dog and the overall main protagonist of Isle of Dogs. He is a leader of a pack of dogs. And later in the movie, he was confirmed to be the brother of Spots; being the same breed as him and having the same coat pattern as well.

He is voiced by Bryan Cranston who also played Joseph Brody in MonsterVerse Godzilla (2014), Hal Wilkerson in Malcom in the Middle, Li Shan in Kung Fu Panda 3, Vitaly in Madagascar 3: Europe's Most Wanted, Zordon in Power Rangers and Walter White in the hit TV series Breaking Bad.

Chief is quiet and reserved and stands out from the rest of the pack. He is the only dog who was a stray. At first, he is aggressive and often tries to explain to Atari (who does not understand) that he does not like him. However, he eventually does show kindness for him.

Chief is a snow-white dog with black spots covered his fur, has long fur on his muzzle and a midnight black nose. He has a scar on his shoulder and half of his ear nipped off as well and has light, sky blue eyes.

For most of the movie, he was seen with dirty fur that gave the illusion that he had black fur with white spots.

At the end of the movie, Chief's normal teeth were replaced with Exploding Millitery teeth and a little speaker in his right ear. Along with having a light gray collar with 'CHIEF' written on the tag, along with three stars above it.

Chief was formerly a house dog that lived in the city. While staying at his home, however, he bit a kid on the hand named Toshiro. He was later sent to the island after the plan was passed, and created the pack that we see in the movie.

Chief with his friends, Duke, Rex, King, and Boss.

Chief chewing off a dog's ear.

"Get out of here and don't come back!"

Chief and his friends. 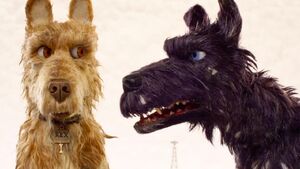 Chief falling in love with Nutmeg.

Chief hearing from Duke that Nutmeg mated with a dog named Felix.

Chief and his friends seeing an airplane crash on Trash Island. 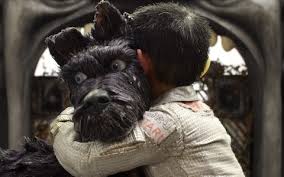 Chief being hugged by Atari after fetching the stick 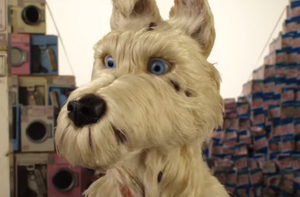 Chief is revealed to be actually white