Police Chief of the ZPD

Chief Bogo is a major character in Zootopia. He is a cape buffalo and the chief of the Zootopia Police Department.

Like many mammals, Bogo was highly prejudiced at the start of the film. He was openly against having a rabbit join his force, which was, initially, comprised of heavy-weight mammals such as elephants, rhinos, and hippos, and predators such as tigers, lions, bears, and wolves. Taking offense by Mayor Lionheart's decision to add a bunny to the force without his opinion on the matter (as Judy was the valedictorian of her class at the Police Academy, making her legitimate in the mayor's eyes), Bogo took it upon himself to assign Judy with the seemingly looked down upon task of meter maid duty. Aside from his work dedication, he disliked anything that interfered with more serious matters, including politics and the antics of his own officers.

Bogo can be quite spiteful to those in his disfavor, and can occasionally allow his personal emotions to override his sense of honor. After butting heads with her on several levels, he purposefully gave Judy a limited window of opportunity and an equal amount of resources to solve her first case (only giving said case for the sake of his job), additionally forcing her to resign if she fails.

Despite all of this, Bogo is not as close-minded as he seems. His prejudice is mainly out of being "realistic", simply believing smaller mammals like rabbits to be unfit for police duty, as they are not inherently strong mammals. Outside of the fact that he's a closet Gazelle fan, Bogo is unafraid to be proven wrong and accept humiliation. When confronted on his shady actions and behavior towards Judy's case, Bogo, after thinking them over, was apparently ashamed by his own dishonorable decisions. Once Judy succeeds in solving her case, he immediately softens up to her, becoming a supportive and soft-spoken ally. His prejudice views also seem to have lifted due to Judy, as he was not only welcoming towards the latter following her success as an officer and a detective, but was also willing to add Nick to the force, though he previously showed a bigoted distrust towards foxes, thus furthering the examples of his growing acceptance.

Reasonings behind Bogo's serious demeanor, specifically towards his position as chief of police, have been hinted at. When conversing with Judy at one point, Bogo alludes to his opinions on society, believing the world to be a broken place, and one in need of "good cops". This presumably drives Bogo to ensure that both himself, and his officers, are consistently diligent and efficient in protecting the city. Those who succeed in doing so, such as Judy, garner his utmost respect.

Towards his comrades on the force, Bogo is rather charming and stark but playfully mischievous. He was seen using his position, and feared reputation as a brute law enforcer, to tease them twice, as seen when "acknowledging the elephant in the room", and again during the epilogue, where he jokingly assigned Judy and Nick to parking duty, only to reveal it to be a jest before giving them a more serious assignment.

Bogo is first introduced during morning routines in the bull pin of the ZPD headquarters. He purposely glosses over formally introducing Judy, not caring for new recruits, and primarily focuses on the fourteen missing mammal cases that have occurred throughout various districts in the city. While the other members are assigned to find said mammals, Bogo regulates Judy to parking duty. When politely approached about the matter, and after being reminded that she was the top of her class at the academy, Bogo states that he didn't forget, but didn't care, leaving Judy with her meter maid assignment.

The following day, Bogo gets word that Judy abandoned her parking duties to catch a weasel, supposedly endangering Little Rodentia in the process, among other charges. The chief calls Hopps to his office and scolds her on the matter, additionally expressing his annoyance in her starry-eyed ways of seeing the world. Before their meeting can continue, a distraught Mrs. Otterton appears, wanting to speak to Bogo. Knowing her reasons for being there, Bogo tries to explain that her husband, Mr. Otterton—who is also one of the fourteen missing mammals—will be found in a matter of time, asking Mrs. Otterton to have patience. Judy then volunteers to find Otterton, personally, prompting Bogo to fire her on the spot for insubordination. Before he can do so officially, however, he learns that Assistant Mayor Bellwether has already informed Mayor Lionheart that Judy is now on Otterton's case. Knowing Lionheart would be furious if he learns that Judy's been taken off the case, Bogo begrudgingly allows her mission to proceed, but informs her that she only has 48 hours to complete it, or she must resign. Though hesitant at first, Judy agrees.

The following morning, Bogo is called for emergency backup by Officer Clawhauser, requested by Judy in the Rainforest District. Bogo is told that a jaguar turned savage and tried to kill her and her accomplice, Nick Wilde, but the jaguar is nowhere to be found. Feeling as if Judy is running a wild goose chase, Bogo demands her badge as a sign of resignation, but Nick stands up for her, scolding Bogo for his prejudices, and noting that she still has ten hours, by that point, to find Otterton. Bogo, being an animal of his word, is powerless to overcome the bargain with the ten hours still being available, and solemnly allows both Nick and Judy to leave and continue the investigation.

The following night, Bogo is in his private quarters entertaining himself with a Gazelle app, only to be interrupted by Clawhauser, who discovers the chief's secret love for the pop star. Embarrassed, Bogo quickly tries to change the subject, leading Clawhauser to reveal that Judy has uncovered all fourteen missing mammals, plus the savage jaguar, deeply shocking and impressing the chief. Bogo and his force infiltrate an asylum operated by Mayor Lionheart, where it is revealed that the mammals, all predators, have been illegally imprisoned by wolf mercenaries per the mayor's orders, and have somehow gone savage. Lionheart is arrested by Bogo, and the new mayor, Bellwether, rises to power subsequently.

Judy is hailed a hero following these events, and earns Bogo's respect. However, the savage predators are not cured, as the cause of their peculiar behavior has yet to be uncovered. This leads to public outcry, with citizens believing predator mammals are reverting back to their "natural instincts", causing them to lash out and lose their sanity unexpectedly. With the city in fear, Bogo discusses with Bellwether that Judy, the hero of the city, should be promoted to be the spokesperson for the Zootopia Police Department. Judy denies the offer, feeling she's ruined the city, and resigns from her position as officer.

During the climax, Judy discovers the truth behind the predator's strange behavior; it's Bellwether who's to blame, as she and her ram henchmen created a serum capable of turning civilized animals into wild beasts, using it to turn the predator minority population savage so the prey majority population would turn against them and, in turn, have prey dominate the city. Judy and Nick rush to alert Chief Bogo, but are intercepted and trapped by Bellwether and her henchrams. Instead, Bogo is given a call by Bellwether that Nick has gone savage, and is attacking Judy. When he arrives at the scene, however, Judy plays a record on her carrot recorder, which reveals Bellwether's confessions of criminal activity, and the former mayor is arrested subsequently.

In the end, Judy is reinstated, while Nick joins the force, as well. Bogo accepts both, and treats with as much dignity and respect as the other members of the force. However, this doesn't stop him from enjoying a few rounds of playful banter with the duo, on account of their history with one another.

Bogo is last seen during the credits, excitingly dancing alongside Clawhauser at Gazelle's concert performance. 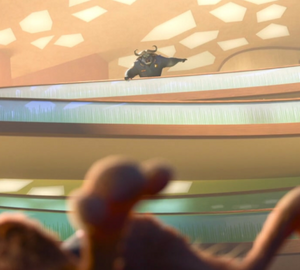 Bogo scolding Judy for leaving her post—despite the fact that she stopped a crook. 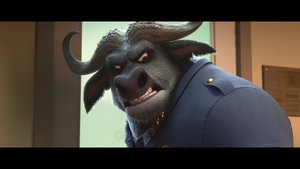 Bogo and his force arriving to arrest Bellwether.