Chief of the Powhatan tribe

To teach his daughter.

To protect his tribe.

Chief Powhatan is the king of the Powhatan tribe and widowed father of Pocahontas in the Disney movie of the same name.

He was voiced by the late Russell Means, and his singing voice was provided by Jim Cummings.

He wanted his daughter to marry a warrior named Kocoum. He think that the path she should follow bhut his daughter is not sure. When he learn about of a boat with british white men arrived on the coast. He let Kocoum decide to attack the colonists. When one of his warriors is injured he judge the colonists dangerous.

He call his tribe friends for help them but Pocahontas told if he will listen one of the white british men if he let him talk. powhatan agreed with his daughter opinion but when Kocoum is killed he get mad at John Smith and blame him for the murder when it was a other young man who killed him. He also get mad at his daughter who just want to help her people but Powhatan she was blind by her way he didn't listen what she tried to said. When Pocahontas told if he want to Kill John Smith he have to kiill her first.

After seeing what would happen, he now knows he will not win and realise all men go to lose their life in both side. He decide if a other life is taked that will not begin by him and free John smith. When John Smith protect him from the Governor he is later grateful see him as a brother who he will protect. 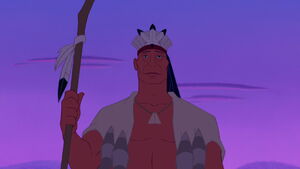 Powhatan returned from the war 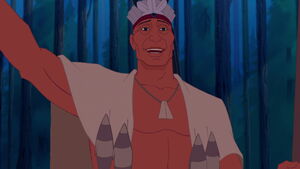 "My children, the Massowomaks have been defeated!" 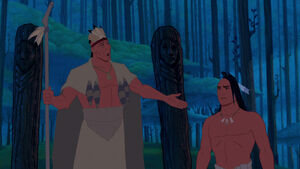 "Our warriors were brave, but none as brave as Kocoum!" 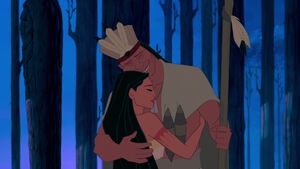 Pocahontas welcomes her father back home. 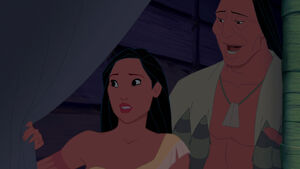 "Kocoum would make a fine husband. He's strong and will be there to protect you." 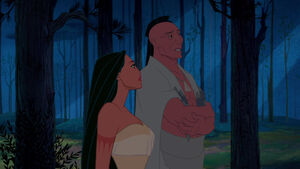 Powhatan tells Pocahontas to be steady like the river. 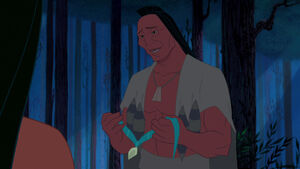 "Your mother wore this for our wedding. It was her dream to see you wear it at your own." 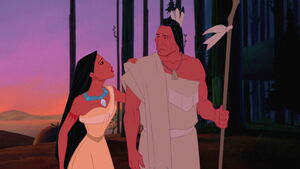 Pocahontas begging her father to make peace with the settlers, which he sees no use in doing. 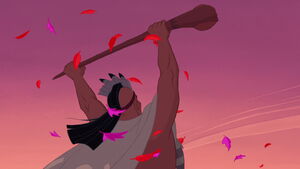 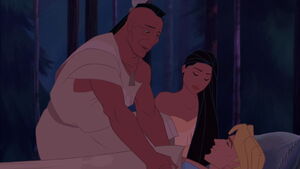 "You are always welcome, among our people. Thank you, my brother." - Chief Powhatan gratefully gave John Smith his cape for saving his life from Ratcliffe's gunshot. 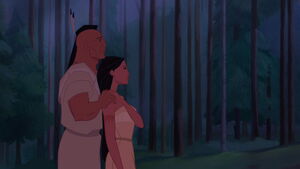 Powhatan comforts his daughter, as they watch John Smith sails back to England, and hope they can see him again someday. 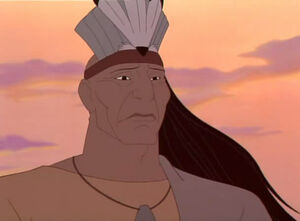 Powhatan watches the ship with his daughter on board sail away. He believe his daughter will make him and his tribe proud by bringing peace and friendship.