To become stronger so he could finally reveal his true gender (failed).

To get out of Hope's Peak Academy (failed).

Chihiro Fujisaki is a character featured in Danganronpa: Trigger Happy Havoc and a participant in the Killing School Life.

Chihiro was killed by Mondo Owada in Chapter 2 after he divulged his secret to him.

He is the creator of many beings of Artificial Intelligence, who consider him to be their father. These include Alter Ego, Chiaki Nanami and Usami. He is also one of the creators of the Neo World Program, alongside Miaya Gekkogahara and Yasuke Matsuda.

Chihiro played a minor role in Danganronpa 3: The End of Hope's Peak Academy.

Chihiro looks like he’s around 19 years old. He has a small, lithe stature and doll-like appearance with short, light brown, layered hair and greenish-brown eyes. He donned a school uniform set consisting of a dark green jacket with a white dress shirt underneath, a brown skirt, matching suspenders, black socks and white mary janes.

Chihiro was a very intelligent boy, but he also had a very meek and timid personality. He was very shy and apologizes a lot - it's easy to intimidate him to the point of tears. However, he also loved to talk about anything related to his work as a programmer and he becomes more lively whenever the topic is brought up. Chihiro is one of the kindest characters in the series, as he literally wouldn't hurt a mosquito, because it's "hungry and might have a family". After Leon Kuwata's execution, he felt guilt-ridden, even though it wasn't his fault. When he was attempting to reason with Byakuya Togami in Chapter 2, he revealed a deep disdain for disputes occurring between friends.

Unfortunately, Chihiro also had a deep-rooted complex over being looked down on by others as being "weak". This happened as a result of memories and experiences from his childhood where he was frequently bullied and told to act tougher due to him being rather frail for a boy. To make the bullying stop, he started disguising himself as a girl to avoid the pressure of having to become stronger. However, this only made his insecurities even worse. Though he tried to hide it, he gets uncomfortable when others treated him as a girl, and he would rather spend time with other boys instead of girls. He greatly admired men who are physically strong and he wished he could be like them.

When Monokuma threatened to reveal everyone's secrets, including Chihiro's real gender, Kiyotaka Ishimaru came up with the idea that everyone should share the secret right away. Naturally, most of them declined the request. However, Chihiro was one of the very few who planned to reveal his secret out of his own will. Instead of falling into despair, he became very determined to overcome his weakness and planned to become stronger so he could be his true self. Sadly, he didn't realize that he was already showing a significant amount of strength, due to his determination and will to confront his own core insecurities.

In the official artbook, it's mentioned that he wants to be strong so he can protect others. 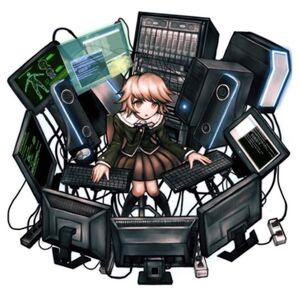 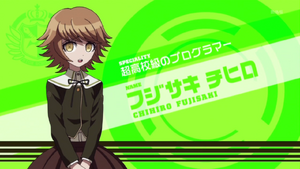 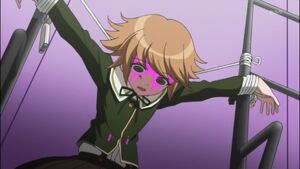 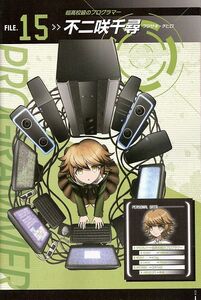 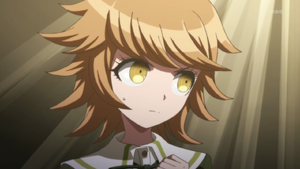