Chihiro Ogino, also known as Sen after being temporarily renamed by Yubaba, is the main protagonist of the Oscar winning 2001 Studio Ghibli film, Spirited Away.

She is voiced by Rumi Hiiragi in the Japanese version of the movie, and by Daveigh Chase, who earlier voiced Lilo Pelekai in Lilo & Stitch, in the English version.

Chihiro made her debut in the movie as a whiny and petulant 10-year-old little girl, yet eventually becomes a brave and selfless little girl. At the beginning, she has to move to a new home with her parents, but encounters an enchanted bathhouse. Her parents are turned into pigs and she is forced to work at the Bathhouse in order to survive.

Chihiro is first seen on the way to her new home with her parents. Her father realized that he took a wrong turn and the three entered a mysterious tunnel that leads to an abandoned theme park with abandoned restaurants before Chihiro's parents found a restaurant that's still in business. When her parents are eating, neither of whom (not even Chihiro herself) being aware of it being spirit food, she wanders off to eventually find out she is in a spirit world. Chihiro meets a boy named Haku and later finds out that her parents have been turned into pigs and are beaten away from the food by dark ghosts. When she runs off, she finds out that where people were planning on putting a river, there is water in it. Soon, she becomes transparent until Haku gets her to eat some kind of berry (after a warning that not eating food from this world will make her disappear and assurance that it will not turn her into a pig). The two then find out that she was not dreaming when they see her parents as pigs. Haku tells her when things quiet down, to go out through the back gate and go downstairs until she reaches the boiler room to meet Kamaji. He tells her to insist she wants to work in the bathhouse even if he says no or Yubaba, the witch and chief of the bathhouse, will turn her into an animal (with Yubaba having already chosen piglet to fittingly suit her parents' fates). Going down the stairs starts out as safe until one of them breaks and she screams running down and runs into a wall. Finally, she reaches the boiler room and asks Kamaji (who receives four bath tokens at once) for a job, but due to having a lot of soot balls under a spell working for him, he refuses. When Chihiro attempts to help, she only gets reprimanded for it, and he tells her that if they don't work, the spell will wear off and they'll turn back into soot. As an older girl named Lin gives him food and takes yesterday's bowl from him, Kamaji tells Chihiro to make a deal with Yubaba. In the meantime, Chihiro has to leave both pairs of footwear in the boiler room as they are going to the top floor, where Yubaba lives. Yubaba is initially reluctant to hire her, but eventually does so in exchange for her identity, renaming her Sen. Haku takes Sen to visit her parents' pigpen and returns her clothes. Within, Sen finds a goodbye card from a friend with her real name written on it. Haku tells her that Yubaba controls people by taking their names and that she will become trapped in the spirit world if she forgets her name, as he has.

While working, Sen invites a silent, masked creature named No-Face inside the bathhouse, believing him to be a customer. A "stink spirit" subsequently arrives, and Sen is quickly assigned to tend to the guest by her nauseated superiors. She discovers he is actually the powerful guardian spirit of a polluted river. In gratitude for cleaning him, he gives Sen a magic emetic dumpling. Sen is congratulated by her gleeful coworkers, who had shunned her as an outsider. Later, while most of the staff sleep, No-Face tempts a worker with gold. The greedy employee takes the bait only to be swallowed whole. No-Face begins demanding food, producing gold to tempt the naïve staff. As the workers swarm him, hoping to be tipped, he devours two of them and grows larger.

Sen discovers paper shikigami attacking a dragon and recognizes the dragon as Haku transformed. When a grievously-injured Haku crashes into Yubaba's penthouse, Sen follows him upstairs. When she reaches Haku, a shikigami that stowed away on her back transforms into Zeniba, Yubaba's identical twin sister. She transforms Yubaba's baby son Boh into a mouse, creates a decoy baby, and turns Yubaba's pet bird creature into a tiny, fly-like bird. Zeniba tells Sen that Haku has stolen a magic golden seal from her and warns Sen that it carries a deadly curse. After Haku dives to the boiler room with Sen and Boh on his back, she feeds him part of the dumpling, causing him to vomit both the seal and a black slug, which Sen crushes with her foot.

With Haku unconscious, Sen resolves to return the seal and apologize for Haku. Before she leaves the bathhouse, Sen confronts the now-massive No-Face and feeds him the rest of the dumpling. No-Face chases Sen out of the bathhouse, steadily vomiting out those he has eaten and thus gradually returning to his former self. Sen, No-Face, Boh, and the bird creature travel to see Zeniba. Enraged at the damage caused by No-Face, Yubaba blames Sen for inviting him in and orders that her parents be slaughtered. However, Haku reveals that Boh is missing, and so he promises to return Boh in exchange for Yubaba freeing Sen and her parents. Yubaba agrees, but under the condition that she gives Sen one final test, and if she fails, she belongs to Yubaba.

Sen, No-Face, Boh, and the bird creature arrive at Zeniba's house. Zeniba, now the benevolent "Granny," reveals that Sen's love for Haku broke her curse and that Yubaba had used the black slug to control him. Haku appears in his dragon form and flies both Sen and Boh back to the bathhouse. No-Face unexpectedly shows itself as a very good spinner for Zeniba and accepts her proposal to stay as a helper.

On the way back, Sen recalls a memory from her youth in which she had fallen into the Kohaku River while trying to retrieve her fallen shoe but was swept safely ashore. After correctly guessing that Haku is the spirit of the Kohaku River (and thus revealing his real name), Haku is freed from Yubaba's control. When they arrive at the bathhouse, Yubaba tells Sen that in order to break the curse on her parents, she must identify them from among a group of pigs. Sen correctly states that none of the pigs are her parents, releasing her parents from the curse and herself from her contract with Yubaba. Haku takes her to the entrance to the spirit world and promises to see her again in the future. Chihiro reunites with her restored parents, who have no memory at all of what had happened to them. They walk back to their car, which has become covered in fallen leaves and dust after days passed in their absence, and drive away to their new house after Chihiro looks back at the entrance to the spirit world for the final time. 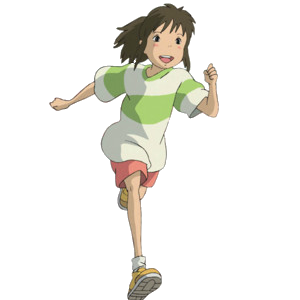 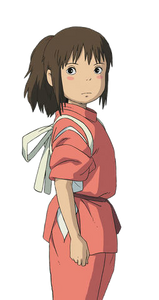 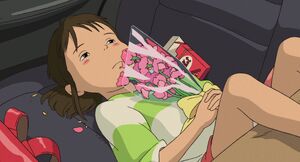 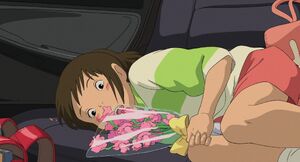 Chihiro sitting in the car, holding a bouquet of flowers. 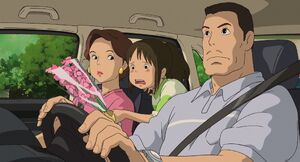 Chihiro complaining about her ruined bouquet. 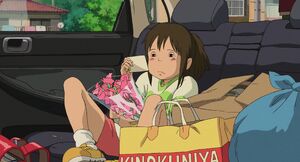 Chihiro looking at note from a friend. 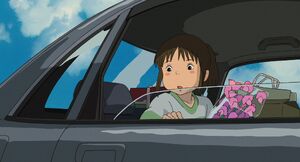 Chihiro looking out the window. 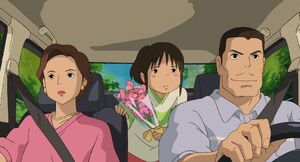 Chihiro with her parents. 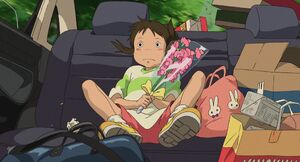 Chihiro as her father drives the car off road. 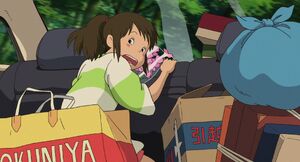 Chihiro as the road gets bumpy. 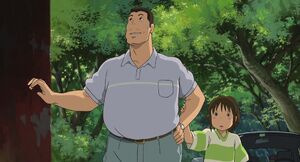 Chihiro with her father. 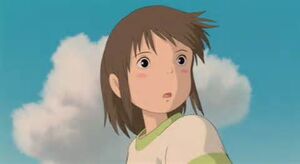 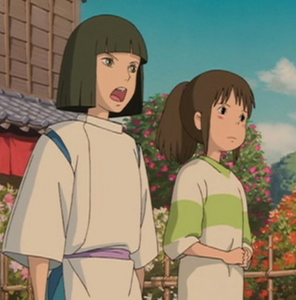 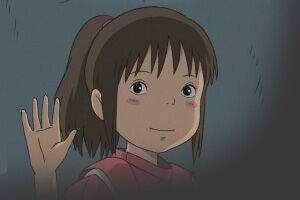 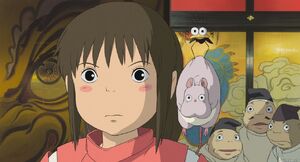 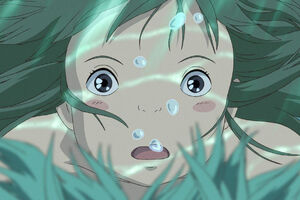 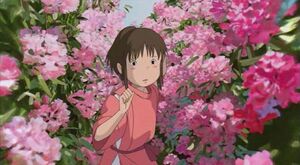 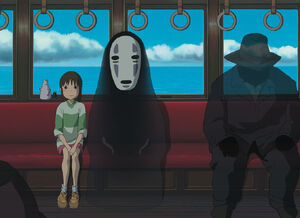 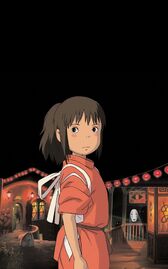