To help Z return to the colony (succeeded)

Animal
Chip is a giant wasp who is the husband later widower of Muffy and a minor character in the 1998 film Antz.

He was voiced by Dan Aykroyd, who also voiced Yogi Bear.

Z and Bala find the land of red and white and find Chip with his wife Muffy. Chip makes fun of Muffy's hobbies.

Later he starts making out with Muffy, but this didn't last long until a fly swatter kills Muffy. Chip wails and cries a foot comes and Chip leaves as Muffy's carcass is crushed.

After Cutter takes Bala, Z finds Chip in a wine bottle and helps Z get to the ant hill to save Bala. Z thanks Chip and wishes him good luck.

Chip and his wife Muffy

Chip with Muffy, Z and Bala 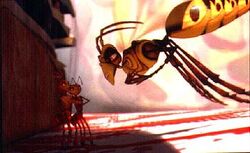 Chip mourning Muffy after she is killed by a flyswat.
Add a photo to this gallery
Retrieved from "https://hero.fandom.com/wiki/Chip_(Antz)?oldid=1881322"
Community content is available under CC-BY-SA unless otherwise noted.