The emissary of light

To regain his memories (Succeeded)

Chip (チップ Chippu?), real name Light Gaia (ライトガイアRaitogaia?), is a fictional character from the Sonic the Hedgehog series and the deuteragonist of Sonic Unleashed. He is a primordial entity from the dawn of time and the incarnation of light, day and rebirth. Since the earth's beginning, Chip has been in an eternal conflict with Dark Gaia to protect the planet, where they maintain a cycle of destruction and rebirth of the world.

In the present day, Chip was awoken prematurely by Dr. Eggman when he tried to harness Dark Gaia, losing his memories as a result. He later met Sonic the Hedgehog and the two of them worked together to recover Chip's memories and bring the planet back together after Dark Gaia shattered it. After restoring his cycle with Dark Gaia, Chip returned to dormancy.

Born as Dark Gaia's opposite, Chip originates from the beginning of time and has lived on the earth since when the planet first began. While their origins are unclear, Prof. Pickle has speculated that both Chip and Dark Gaia are manifestations of the planet's desire for a balance between light and darkness. It was back then that Chip began his job of protecting the earth from Dark Gaia who sought its destruction, starting an endless cycle of destruction and rebirth of the planet. In this cycle, Chip would awaken from the planet's core after Dark Gaia had incubated in it for millions of years and broken the planet apart during the time of awakening. Chip would then return Dark Gaia to dormancy in the planet's core, rebuild the planet, and go back to sleep in the core again, thus restarting the cycle. Despite his many years of duty, Chip never came to learn about the earth itself. Some tens of thousands of years ago, Chip had just finished another cycle of destruction and recreation of the world with Dark Gaia, before returning to dormancy for Dark Gaia's return.

Chip was awoken prematurely when Dr. Eggman used his Chaos Energy Cannon to awaken Dark Gaia and shatter the earth, giving Chip retrograde amnesia. He ended up unconscious in Windmill Isle where he unknowingly used his powers to break Sonic the Werehog's fall from space. When he was found by Sonic, Chip was briefly frightened when he saw Sonic's Werehog form. Chip soon realized his amnesia though and panicked until Sonic promised to help him regain his memories. Dawn then arrived, and Chip saw Sonic return to his old self.

When the two arrived in Apotos, Chip took an instant liking to the Ice Cream Vendor's Chocolate Chip Sundae Supreme, which Sonic named him after. After fruitlessly searching Apotos for anyone who knew Chip, night fell and Chip witnessed Sonic become a Werehog again. Soon after, Chip and Sonic found Tails, who took them to Spagonia to see Professor Pickle, who could shed some light on Dr. Eggman's plan. When they got there however, they learned Professor Pickle had been kidnapped by Eggman. The trio tracked the Professor to Mazuri where they freed him from Eggman's base and reclaimed the Gaia Manuscripts. Back in Spagonia, Pickle explained how Dark Gaia was responsible for the planet's shattering and that they could restore the planet and seal Dark Gaia by taking the powerless Chaos Emeralds to the Gaia Temples.

Sonic and Chip shortly after visited Mazuri where Sonic saved the villagers from Eggman before they pursued and drove Eggman off. They then found the local Gaia Temple, which Chip discovered he could activate, allowing Sonic to restoring the Emerald and Mazuri's continent. Chip and Sonic returned to Spagonia at night where they met Amy who was unable to recognize Sonic as Werehog. As Amy left, Chip unintentionally depressed Sonic by noting how different he was. When Amy later was caught by people possessed by Dark Gaia, Chip unknowingly exorcised them when he took a picture. Though they left before Amy could see Sonic, they soon after came clear.

Resuming their mission, Chip and Sonic continuing traveling the world, fixing the planet one piece at a time. Meanwhile, Chip had a great time seeing the world. As they restored the sixth continent though, Chip got sucked into a mural inside the temple where he got his memories back. Returning to Sonic, Chip explained his history, the cause of his memory loss, and the reason why Sonic remained the same person as a Werehog. He thanked Sonic for everything and tried leaving to restore the planet alone, but Sonic convinced him to letting him help.

Traveling to Eggmanland and the last Gaia Temple, Chip led Sonic to the Temple where they started the process of restoring the final continent. As they thought their mission was over, they were ambushed by Eggman and his Egg Dragoon and knocked into a hole to the planet's core where Sonic defeated the Egg Dragoon. However, Dark Gaia then emerged from the core, knocking Eggman away, and briefly attacked Chip and Sonic before sucking its remaining power out of Sonic. With Sonic too weak to escape, Chip protected him and called the Gaia Temples to him, turning him into the Gaia Colossus.

In his new form, Chip and Sonic fought Dark Gaia. However, Dark Gaia soon reached full maturity, becoming Perfect Dark Gaia, and began enveloping the world in darkness. Fortunately, Chip and Super Sonic defeated Perfect Dark Gaia and sealed it inside the planet. With the final continent coming down, Chip said goodbye to an unconscious Sonic and threw him back up to the surface while he was sealed within the earth. Leaving his necklace as a gift for Sonic, Chip contacted Sonic telepathically, promising him that he would never forget him and he would always be with him as a part of the earth he tread.

Chip has a bright personality; he is playful, merry, carefree and very goodhearted, though also somewhat goofy. He is naïve and very curious about the world, often asking simple but ponderous questions, and enjoys the slower things in life. Though he is never mean of intention, he sometimes comes off as a little annoying and blunt, like accidentally pointing out the ugliness of Sonic's Werehog form and often getting up in Sonic's face.

Chip is incredibly gluttonous and absolutely adores food, especially chocolate which he always keeps on him, and can be utterly distracted by it. Regardless of his love for food, Chip will always offer a chocolate bar to those he meet as a sign of friendship and will try to offer people food to help with their issues. Likewise, Chip hates hunger, preferring to be dead rather than going hungry for longer periods of time. Additionally, he is also concerned about others' hunger as he was mostly concerned that Professor Pickle could be starving while he was Eggman's prisoner.

When facing an opponent, Chip will act threatening and scary, striking poses and flaunting his fists while keeping a serious demeanor. Behind this front however, he is relatively scared in such encounters and would, at least prior to recovering his memories, seek cover behind Sonic where he would resume acting threatening. Also, as seen in Sonic: Night of the Werehog, Chip is genuinely terrified of ghosts and scary things, even fainting dead away after Sonic teasingly scares him with a flashlight.

Chip is very dutiful about his job of protecting the earth from Dark Gaia, having stuck with it for countless ages. He also believed at first that it is his responsibility alone and that no one has to get needlessly involved, as he tried to leave on his own to defeat Dark Gaia after regaining his memories, even though he was reluctant. Thanks to Sonic however, Chip realized that it was okay to let others help him with his duty. 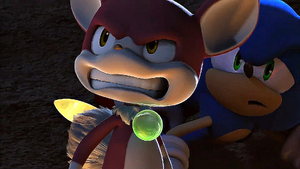 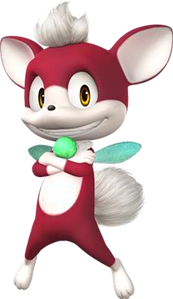 Retrieved from "https://hero.fandom.com/wiki/Chip_(Sonic)?oldid=1726238"
Community content is available under CC-BY-SA unless otherwise noted.