Playing tricks.
Hanging out with their friends.
Teasing Donald and Pluto.
Stealing food.

Chip and Dale (often stylized as Chip 'n' Dale or Chip an' Dale are two chipmunk cartoon characters created in 1943 at Walt Disney Productions. Their names are a pun based on the name "Chippendale". This was suggested by Bill "Tex" Henson, a story artist at the studio.

According to Disney, Chip is the logical schemer, and Dale is the goofy, dim-witted one. Originally the two were of a very similar appearance, but as a way to tell them apart, some differences were introduced. An easy way to visually tell them apart is that Chip has a small black nose (it looks a bit like a chocolate "Chip" as a way to help people remember who is who) and two centered protruding teeth, whereas Dale has a big red nose and his two prominent buck teeth exposed. Chip is also depicted as having smooth, short fur atop his head while Dale's tends to be ruffled.

Chip 'n' Dale first appeared in the cartoon Private Pluto (1943), though they did not have their names or distinguishing characteristics. Pluto has been assigned to guard a pillbox where the two chipmunks are storing their nut supply, with the large gun being used as a nutcracker. However, various portions of Pluto's anatomy (such as his head) are realized as useful nutcracking implements. Eventually, they retreat into the pillbox, leaving Pluto weeping outside.

In their second short Squatter's Rights, they are once again against Pluto, though this time with Mickey Mouse along (though the latter never realizes the chipmunks' presence). The chipmunks have been hibernating in Mickey's hunting cabin, when he and Pluto arrive, they are less than thrilled. Various gags ensue, culminating with Pluto almost having his head blown off by a shotgun. With the aid of a bottle of ketchup, the chipmunks manage to make Mickey think his dog has been critically wounded. Exit one Mouse, leaving the chipmunks once again the sole occupants of the cabin. (Interestingly, though the two chipmunks have no physical distinctions, certain elements of the two chipmunks' later personalities can be recognized.

Chip 'n' Dale did not get their names (or the traits that separate them) until the cartoon Chip an' Dale (1947) where they antagonize Donald Duck. They continued to appear in animated cartoons, usually annoying, tricking, and terrorizing Donald that they became far more famous for antagonizing Donald and are possibly best known for appearing in his shorts (though sometimes it is justified since Donald picks on them), having gained their trademark appearances and personas when acting as Donald's antagonists, until the mid-1950s.

Chicken in the Rough

Chip 'n' Dale wander into a farmyard to collect as many acorns as they can but Dale mistakes an egg for a nut, and is in turn mistaken for a hatching egg. Upon investigation by the rooster, Dale is forced to impersonate a newly-hatched chicken.

In this short, Donald is an apple farmer, and Chip 'n' Dale are wreaking havoc on his apples. A battle for supremacy on the farm ensues, with many apples getting destroyed in the process. The word rhyme "Applecore - Baltimore" is used in this short.

Two Chips and a Miss

Although Chip 'n' Dale are almost always united in a common goal, this was one of their only shorts to see them working against each other, for the affections of Clarice, a performer at the Acorn Club.

In 1989, Chip and Dale became the two main protagonists in a new animated series, Chip 'n Dale Rescue Rangers. They formed a detective agency with new characters created for the show: female mouse inventor Gadget Hackwrench, muscular adventuring Australian mouse Monterey Jack, and Zipper the fly. While in the original shorts the duo are frequent troublemakers who are concerned only with themselves, in Rescue Rangers they are crime fighters who help the less fortunate.

In this series the personality differences between the two are more pronounced, with Chip as the responsible, no-nonsense leader and Dale as the goofy, laid back free spirit. Additionally, they wear clothes in this series which reflect their personalities; Chip wears a leather jacket and fedora (much like Indiana Jones), while Dale wears a Hawaiian shirt (much like Magnum, P.I.). Also, Burton gave Dale a slightly raspier voice not heard in any incarnations before or since.

Chip and Dale appear as guest stars in some Mickey Mouse Clubhouse episodes:

Chip 'n' Dale occasionally appeared in Mickey Mouse Works and House of Mouse. They can also be spotted in the 1983 featurette Mickey's Christmas Carol where they are seen dancing to the music inside Fezziwigs. They also appear at all the Disney Parks as well.

A recurring shtick often mistakenly attributed to Chip 'n' Dale is the characters' alleged use of politeness: "After you," … "No, I insist, after you!" This gag, from the early-1900s Alphonse and Gaston comic strip, is used by another studio's characters: Warner Bros' Mac and Tosh as the Goofy Gophers. However, in the 1950 short "Out on a Limb," Chip 'n' Dale do engage in a round of this (possibly in reference to the Goofy Gophers) before Chip stops it from getting out of hand with a swift kick to Dale's rear end.

The classic voices of Chip 'n' Dale were mostly provided by Helen Silbert, Dessie Flynn/Dessie Miller, and James MacDonald. The earliest voices were provided by female office staff, without credit. In "Private Pluto" the chipmunks' speech was created by speeding up sound clips of normal speech. In a number of the shorts that followed, many of these same sound clips were used again, though later shorts used dialogue specifically recorded for that short.

At one point in "Winter Storage", Chip and Dale get into an argument while caught in a trap. When the scene switches to an outside view of the box (with Donald Duck sitting on the box) the dialogue being heard is actually a sped up segment of the voice-over narration from the Goofy short "A Knight for a Day".

Since 1988, Chip has been voiced by Tress MacNeille and Dale by Corey Burton.

In the Kingdom Hearts series, Chip and Dale reside in Disney Castle as operators of the Gummi Ship garage. While Tress MacNeille and Corey Burton resume their respective roles, the latter uses a deep-sounding voice for Dale. Though making voiceless cameos in the first game, Chip and Dale play a larger role in Kingdom Hearts II. The two also appeared in the prequel game, Kingdom Hearts Birth by Sleep. 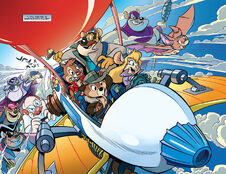 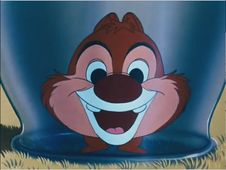 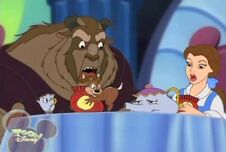 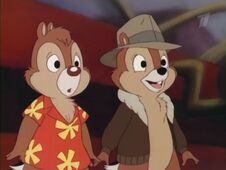 Chip and dale in ducktales reboot 2017 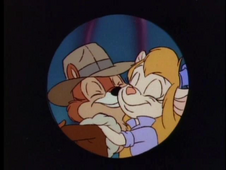 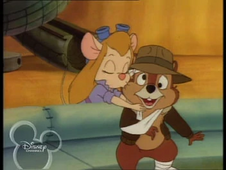