Chipp Zanuff is a hero from Guilty Gear who was first introduced in the first game.

In games, Chipp Zanuff portrayed as tall and muscular, but thin young man with white hair sticking out in all directions. Chipp wearing a black tank top tucked into the free light trousers with two straps on the left hip, shod in high closed shoes with large buckles on his hands is a small glove- Belt. As a weapon Chipp uses a short curve blade attached to the right and going along Bracers hand on his shoulder, in addition, has in its arsenal syurikeny and kunai. In battle, he uses techniques of Ninjutsu, based on energy use ki.

Chipp Zanuff shown in games as straightforward and simple-minded man, impatient and quick-tempered, but unable to get angry for a long time, and we believe that it is necessary to always provide misleading fallen into a chance to improve. He rarely loses morale, constantly striving to become stronger and improve their skills. Chipp is lively interested in Japan, and even claims to have been born there, and not in America, but the idealized image of the country, created by Chipp, has little to do with reality. On non-Japanese origin Chipp indicates speech. Some of his lines in the battle and after the battle consist only of the stereotypical Japanese words, usually known to foreigners, for example, "harakiri", "kamikaze" and even "Fujiyama geisha."

A former biochemical drugs trafficker, Chipp was a youth who struggled to live life on the streets of America. Chipp often sold illegal substances, such as biochemical drugs which act as a highly addictive steroid. Addicts have glowing green eyes, increased strength, muscle mass and uncontrollable anger as a result of their abuse to many other addicts and corrupt organizations like the Mafia, so Chipp had become an avid dealer. Chipp's job was not a safe or comforting one, and he soon gave in to the enticing (but mind altering) drugs that he sold for trade. Business had been going as usual, but it seemed a complication had put Chipp into a situation that lead to him fleeing from the Mafia. Chipp had become outnumbered and, it seemed death had come early for him, but as if from nowhere his pursuers were quickly dispatched, and in front of Chipp stood a man clearly different from the others. He revealed his name as Tsuyoshi, and his next words would change Chipp's outlook on both life and the sins he had committed. Tsuyoshi offered Chipp into his care, which he gratefully accepted. To clear the youth's mind, as well as start a life of honor and repentance, Tsuyoshi trained Chipp in the art of Ninjutsu basics, to which he quickly adapted, and they lived peacefully together until an assassin syndicate ordered Tsuyoshi's killing. Chipp, filled with rage, attempted to pursue the culprits responsible.

Chipp enters the second order tournament to carry on his quest of vengeance. His ending, while non-canonical, is the only ending in the mainstream games to feature Tsuyoshi's face, and it is revealed he has a purple scar over his left eye, ninja attire, a large nose, and a mustache. Chipp believes that even though Justice was evil, she deserved a second chance, just as he did. He then leaves, spending all the time up until the discovery of Dizzy training in the wilderness.

After witnessing the death of Justice, Chipp vowed to protect those in need. He heard of a self-aware gear with a 500,000 world dollar bounty on its head. He set out in search of the Gear in order to assess the situation.

Chipp starts off his quest once more, only to be interrupted by a Necro-possessed Dizzy, who happened to have just fallen from the May Ship. After swiftly getting away, he encounters other characters, including Bridget, Ky Kiske, Faust and Eddie. The story splits from there. In the first ending, Chipp has to save Millia Rage's life once by encountering Venom until the beast is summoned. Venom was totally beaten by Chipp. In the second ending, he meets Slayer, who taunts Chipp, who vows to become stronger.

In this game, Chipp has the new ambition of becoming the President of the Country. For it, he overtakes the Assassin's Guild, and asks everybody to vote him.

At one point he meets with Jam and Anji, the latter of which informs Chipp about the election system. He suggests Chipp to head to Zepp for answers, as Zepp is the only nation that holds elections. Here the player can have Chipp go to Zepp for more information or ask someone else.

If he heads to Zepp, Chipp eventually meets with Potemkin, who convinces him to join the bodyguard group for President Gabriel, informing Chipp that it will be a good step towards making the presidency. Chipp and Potemkin later work together in fending off a group of Robo-Kys that have infiltrated Zepp (Path 1).

Should Chipp ask someone else, though, he meets with Bridget, and later runs into Baiken. After a brief fight resulting from Chipp advising Baiken not to chase revenge, Chipp convinces Baiken to join him and Venom as part of a special troubleshooting group. Their current assignment seen in this path has them go after a corrupt politician named Marco (Path 2).

The Butterfly and Her Gale

In 2182 Chipp becomes the body guard for the president of A Country, Erica Bartholomew, in order to take down the Assassin's Guild. He eventually battles with Volf, the man who killed Tsuyoshi. Volf Explains that Tsuyoshi was part of the guild, but betrayed them, and that is why he was assassinated. In the end, Chipp spares Volf's life, and Erica is able to form an alliance with Zepp. The alliance causes the Guild to lose its foothold within the A Country. Ky Kiske tells Chipp the reasoning behind Tsuyoshi’s assassination: Tsuyoshi was indeed working for the Assassins, but he was actually an undercover agent for the Police. His cover blown, he ran away from the Syndicate, which is when he picked up Chipp. 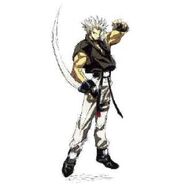 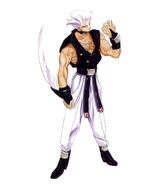 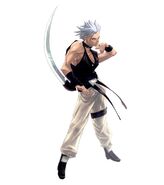 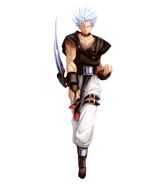 Guilty Gear Xrd -SIGN-
Add a photo to this gallery

Retrieved from "https://hero.fandom.com/wiki/Chipp_Zanuff?oldid=1694897"
Community content is available under CC-BY-SA unless otherwise noted.