Playing in the meadow (formerly).
Hunting with the Wolf.

Kill all the sheep in the meadow with the Wolf (formerly).

Protect the sheep from the Wolf.

In the film, Chirin was a white lamb that lived in a meadow with his mother and other mother sheep that had lambs of their own. One day Chirin's mother warned him about the Wolf King and to never go pass the fence. Chirin listens to his mother and does not go pass the fence. As seasons go by to fall, on one night Chirin is sleeping in the barn with the other sheep when barking and yelping wakes them up as the Wolf busts in and kills Chirin's mother as she was protecting him. The Wolf runs off as Chirin starts crying because he realised the Wolf had killed his mother. He then sets off to the Rocky Mountains to become the Wolf's apprentice. At first the Wolf shows no care for Chirin but as time goes on he then realises how much he wants to become a wolf. The Wolf then decides to make Chirin his apprentice. As Chirin grows older into a ram he says to the Wolf that his plan was to gain strength to kill the wolf that killed his mother but could never get the courage to. One night the Wolf and Chirin decide to kill the sheep in the barn and that Chirin needs to kill the dogs that are guarding the barn. He kills them and breaks into the barn, where he sees a mother sheep jump on her lamb to protect it as he is then reminded of his past, and he does not want to kill the sheep. The Wolf tries to kill the sheep since Chirin won't do it, but Chirin then kills the Wolf and wants to live in the barn. The other sheep do not allow him to come back as he runs off to the mountains and is never seen again and everyone forgets about him, but when a huge blizzard hit, they could hear the faint sound of his ringing bell. 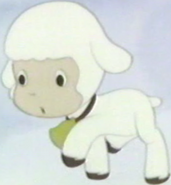 Add a photo to this gallery
Retrieved from "https://hero.fandom.com/wiki/Chirin_(Chirin_no_Suzu)?oldid=1781237"
Community content is available under CC-BY-SA unless otherwise noted.