Chiron Harris is the protagonist of the 2016 Oscar-winning film Moonlight.

Chiron is a black man growing up in a poor, tumultuous Miami neighborhood during the War on Drugs. He struggles to cope with being bullied and harassed for being homosexual and his relationship with a boy named Kevin Jones, in addition to Paula, his abusive, crack-addicted mother.

As a child, Chiron is introduced being chased by bullies through the street. Juan, a local Cuban drug dealer, comes to his rescue and hides him in his crackhouse. He allows him to spend the night with him and his younger girlfriend, Teresa, before taking the boy home to his mother, who grounds him from watching TV for worrying her.

Juan takes Chiron under his wing, teaching him how to swim and take charge of his own life. One night, Juan comes across Paula, who is smoking crack with one of his customers. He berates her for taking the drugs and she does the same to him for selling them to her in the first place. All the while they argue about Chiron's upbringing. Paula goes home and, out of frustration, yells at her son not to look at her.

The next day, Chiron vents by admitting to Teresa and Juan that he hates his mother for what she does to him and asks what a "faggot" means. Juan defines it as "a word to make gay people feel bad." After asking the latter if he sells drugs to Paula, our hero walks away in shame.

As a teenager, Chiron struggles to cope with high school bully Terrel and spends time with Teresa after Juan dies. Paula, driven by her crack addiction and prostitution, forces him to give her the money Teresa loans him.

The next morning, Terrel tricks Kevin into participating in a hazing ritual. Kevin reluctantly strikes Chiron until he is unable to stand before watching Terrel and his goons overpower and attack him. A social worker urges Chiron to reveal the identities of his attackers, but he refuses, stating that reporting them won't solve the problem and he doesn't want to turn his friend in. The following day, Chiron reaches his breaking point and eventually gets his revenge on Terell by smashing him over the head with a chair, which in turn gets him arrested for assault and sent to juvenile hall. As the police take him away, he glares at Kevin for his betrayal.

As an adult, Chiron is presumably released from prison and works as a drug dealer in Atlanta. He receives frequent calls from his mother, who asks him to see her at the drug treatment center where she now resides. One day, he gets a call from Kevin, who invites him to visit him should he come to Miami. The day after, he wakes up, realizing he had a wet dream.

When he visits Paula, he reconciles with her after breaking his silence. She apologizes for her irresponsibility not showing him any love when he needed it and tells him she loves him even if he doesn't love her back. Afterwards, Paula lets her son go.

Chiron goes back to Miami and eventually reunites with Kevin, who works at a local diner. After attempting to probe his friend about his life result in silence, Kevin tells Chiron that he had a child with his ex-girlfriend and, in spite of their relationship being cut short, he is a father. Chiron asks Kevin why he called him, to which Kevin plays a song on the jukebox that made him think of Chiron.

After serving him dinner, Kevin and Chiron go to his apartment, where the latter tells Chiron he is happy in spite of the fact that his life didn't turn out the way he hoped, which leads to Chiron breaking down and admitting that he hasn't been close with anyone since their time on the beach. Kevin comforts Chiron and they finally embrace. The film ends with a flashback of Chiron as a boy standing on a beach as the moonlight shines on him. 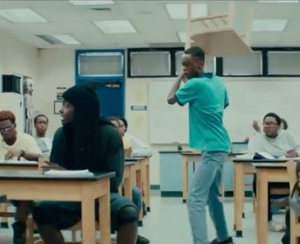 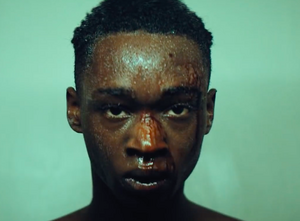 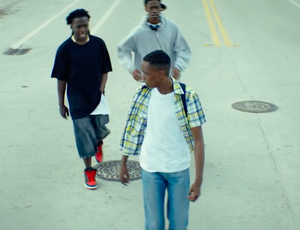 Chiron being picked on by Terrel and his goons 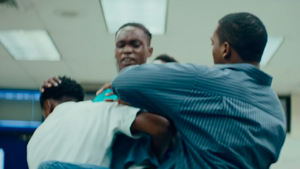 Chiron being restrained by his classmates for attacking Terrel 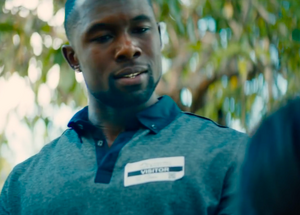 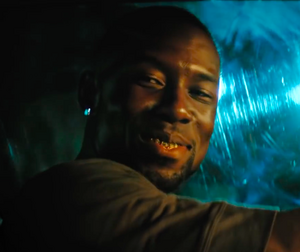 Chiron's endearing smile
Add a photo to this gallery

Retrieved from "https://hero.fandom.com/wiki/Chiron_(Moonlight)?oldid=1895713"
Community content is available under CC-BY-SA unless otherwise noted.