Heroes Wiki
Register
Don't have an account?
Sign In
Advertisement
in: The King of Fighters Heroes, Female, Honorable,
and 56 more

Protector of the Orochi seal
Sponsor of The King of Fighters '96, '97 and 2003 tournaments

She is voiced by Akiko Saito, Yukiko Sugawa and Sayaka Ōhara.

Chizuru is a young woman among the two heiresses of the Yata clan, and the other is her twin sister Maki Kagura. As the heiress of Yata, she grew up as a priestess and was given responsibility for keeping Orochi's complete diligent seal. One night, Gonitz visited their home with the intention of destroying the seals. Maki faced him, but because of the power of their tribes, they could not fight Orochi without the help of two other clan, and Goenitz was too powerful one of the Heavenly Kings, she lost and suffered fatal injuries. Goenitz destroyed the seals and leaves and satisfied a small but released Orochi. Before her death, Maki passed the responsibility of the seal to Chizuru, asking her to join the three clans again to defeat Orochi.

Ten years later, Chizuru became a very successful and prestigious business woman under the family named Kagura. Since the beginning with Geese Howard, she has secretly tracked The King of Fighters tournaments and held a tournament in 1996, hoping to let the other two heirs Kyo Kusanagi and Iori Yagami help her replace the broken seal. Although both Kyo and Iori were protesting, the three of them successfully completed their mission at the climax of The King of Fighters 97. She hosted another King of Fighters tournament in 2003 with similar intent to previous attempts. However, during the tournament, it was revealed that Chizuru was under the control of the mysterious puppet operator Botan, a member from the past.

Ironically, she eventually used the power of the Yata Mirror to take advantage of her power to fight against the fantasy of her sister Maki as a deputy boss in the game. Eventually, she got rid of Botan's control and tried to restore Orochi's seal, but Ash Crimson stole her power before she could. She survived the attack, but could no longer participate in the battle, demanding that Kyo's self-proclaimed disciple Shingo Yabuki fill her position in the "King of Warriors". She talks to Benimaru Nikaido and keeps in touch with current events and Ash's actions. When Ash disappeared in the King of Fighters XIII, her power came back.

Before the start of the King of Fighters XIV tournament, Chizuru felt an evil threat that distorted the real structure and worried that Orochi's soul might be included in Verse. After Verse was defeated, Iori contacted her to come to Hungary to go to the Orochi reform. Chizuru called Kyo and they re-closed the weakened Orochi.

Having to watch her own sister murdered in front of her, Chizuru took that trauma and focused on sealing Orochi, becoming very serious. After Orochi was sealed, however, she started to lighten up thanks to Mai, King, and King's brother, Jan. 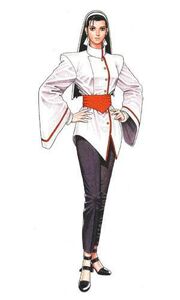 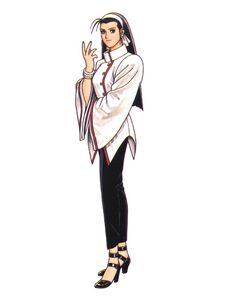 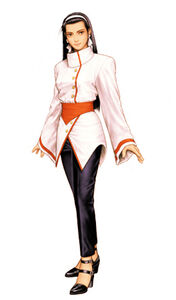 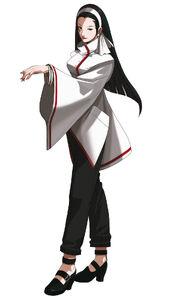 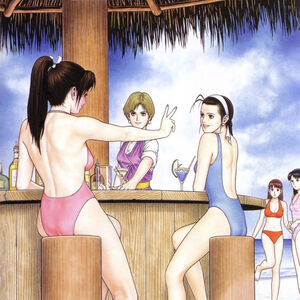 Chizuru, Mai Shiranui, King and Athena Asamiya at the beach by Shinkiro 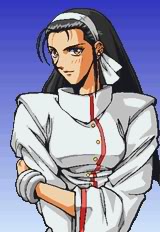 The King of Fighters: Kyo 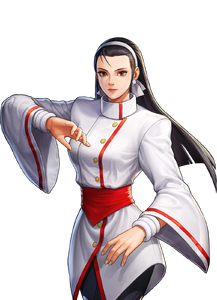 The King of Fighters All Star: portrait art.