No information
Chizuru Minamoto (源 千鶴, Minamoto Chizuru) is a main character of the Kanokon series. She is a female kitsune and love interest of Kouta.

She was voiced by Ayako Kawasumi in the Japanese version, and by Dorothy Elias-Fahn in the English version.

She appears to be a normal, teenage girl, but she is in fact a 400-year-old powerful kitsune. When she changes form, her hair goes from black to blond and she gains fox ears and a tail.

Chizuru is a carefree second year female student at Kouta's school. She is constantly hanging around and on Kouta, as he is the only male she acts genuinely towards. She loves Kouta very much and wants to enter a "relationship of sin" with him. She is a very straightforward person and makes almost constant sexual suggestions and actions toward Kouta. 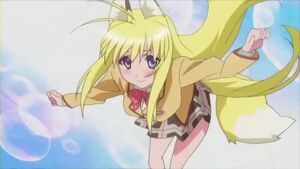