Frazer (by Nadine)
The Best Driver in the Business (by Charlie)

Searching for treasure around the globe.

To find the Iram of the Pillars then later care for an injured Charlie Cutter.
To find the Tusk of Ganesh and kill Asav (all succeeded).

Chloe Frazer is a recurring character in the Uncharted video game series, serving as a central character in Uncharted 2: Among Thieves, a supporting character in Uncharted 3: Drake's Deception and the main protagonist of Uncharted: The Lost Legacy. An Australian-born treasure hunter, constantly looking out for the next big thing. Chloe is not only known for her driving skills but also seductive tendencies, especially with male partners such as Harry Flynn and Nathan Drake.

Chloe is voiced and motion-captured by Claudia Black, who also portrays Samantha Byrne in the Gears of War series, and voiced Cassandra in Hercules: The Legendary Journeys. In Uncharted: The Lost Legacy, Michelle Lee provided motion capture for the character.

Chloe Frazer was born in India is the daughter of unnamed parents, which her father being Indian archeologist who had high knowledge with Indian mythology and the Hoysala Empire. Her father was deeply obsessed with the Hoysala Empire, and drove Chloe and her mother away so he could find the Tusk of Ganesh. Chloe was raised by her mother in Australia, as her father went after the Tusk of Ganesh, which would lead to his death by rebels and thieves. Due to her father pushing her away, Chloe gained a cynical view on the world, and would only trust herself and not risk herself for anyone else.

Chloe reunites with Nate and Sully in finding the Atlantis of the Sands, and works with Charlie Cutter on their adventure. After Nate, Sully and Cutter trick Katherine Marlowe and Talbot into taking the fake Sir Francis Drake ring, Chloe comes out of the van and tells the group that Marlowe went into a building. After finding the secret hideout, Chloe is tasked with staying in the van to prepare for a quick getaway if needed, and later helps them escape from Marlowe's agents.

At their hideout, the group discuss the next step to finding the next clue, and Nate decides to let Chloe and Cutter go to Syria while he and Sully to France. Chloe and Cutter explore the Syrian castle, and run into Nate and Sully, who came to rescue them from Marlowe's men. The group manage to solve the clues to find the secret entrance, but have to fight more agents across the castle. When Cutter is drugged by Talbot, Chloe manages to understand the next puzzle, and later snaps Charlie out his state when he is strangling Nate.

Chloe and the group solve more puzzles and acquire the amulet, but are held at gunpoint by Talbot and his men when reaching outside. Cutter then fakes being brainwashed and shoots Talbot, ordering his friends to run. Chloe, Sully and Nate make it to safety, but Cutter ends up trapped on one of the towers, and is confronted by Marlowe. Marlowe orders her Talbot and her men to light a fire on the tower to kill him, but Cutter jumps off and breaks his leg. Chloe and Nate are forced to fight off Marlowe's agents while Sully carries Cutter out of the castle, and the group manage to escape by getting in a bus. Chloe then attempts to have Nate drop the adventure, but Cutter warns that he will never forgive him if he does. Chloe decides to back out to help Cutter with his broken leg, and Nate and Sully continue their adventure with Elena in Yemen.

Chloe is briefly mentioned in A Thief's End, when Nathan rummages through his things in the attic, where Chloe's notes states that she's willing for another adventure if she's in.

While Elena brings out the best of Nathan Drake, Chloe is the contingent of Drake's wild and bad side. Chloe is extremely adaptable and a strong-willed fighter, she as well cares for the partners she encounters however she has known to be more self-preserved and will look out her own best-interests should the situation demand for it. The perfect example is when Jeff was wounded and Nate tried to carry him though the war-torn streets of Nepal as to save him, Chloe pleaded to leave him behind as he would only hold them back. Despite this demenour she does care about and will protect the people she encounters.

Chloe is very sexually forward as well, especially with attractive male partners. She has shown to be very seductive and knows what she wants and how to get it an example would be when meeting with Drake, she was obviously the aggressor of the relationship it can be assumed this is the same with Flynn. Chloe is also incredibly assertive, despite their meeting going to a bad start with Drake as he was angry with her new founded partnership with Flynn she was able to both calm him down, clear him about her and Flynn's plan to locate the ships and split the take three ways then later have sex with him, all the while assuring Nate that Flynn was going to be "fine" after discovering the two have a "mostly professional" relationship. These are all factors of Chloe's "dominatrix" personality.

Chloe possesses the same wit as Nathan Drake but is considerably more cynical. Despite her self-preservation she will definitely protect the people she cares about. When Elena was wounded by Flynn's suicide grenade and told Drake and herself to kill Lazarević by leaving her behind Chloe writ it off and helped carry her through Shambhala while Drake cleared the two of them a path. Another example is when Cutter was under the affect of a drug, causing him to behave violently towards Drake. While Sullivan was prepared to shoot him as he was about to strangle Nate to death Chloe was able to snap him out of his trance as well look after Charlie when he was injured. She also saw Drake's obsession with Iram pointlessly dangerous as it was risking all their lives.

Chloe is an extremely adept driver being described as the best in the business by Harry Flynn and Charlie Cutter. She is also quite intelligent, rivaling both Drake and Flynn's an example is when Nate translated a file by Marco Polo and realized that he was talking about the lost fleet, instantly. Chloe is quite good with guns and marksmanship, when Drake was overpowered by Draza during their brawl on board the train and close to being choked to death, she was able to shoot him square in the head. Though it hasn't been shown, she is a skilled fighter.

Despite being an impressive fighter, Chloe can be outmatched at times. An example is when she and Elena were covering Drake and an injured Jeff from Lazarevic's soldiers and she was ambushed by a soldier who came close to killing her should Drake not have intervened. Another time is when she was overpowered by Harry Flynn after her true allegiances were revealed, and when fighting Asav by herself.

In Uncharted 2: Among Thieves, Chloe's signature weapon is a .45 Defender however hers is more unique as it has a flame painted near the barrel. She was also seen with an RPG when Nate had become overpowered by Lazarevic's soldiers, using the rocket launcher to destroy a truck. She later cast the weapon aside and it wasn't seen anywhere else during the game.

In Uncharted 3: Drake's Decepticon, Chloe trades up to a Desert-5. 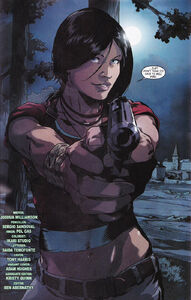 Chloe in the comics. 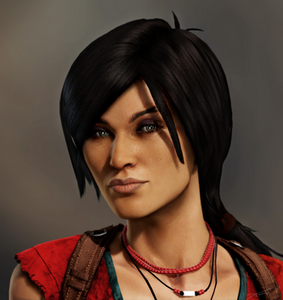 Chloe in Uncharted 2: Honor Among Thieves. 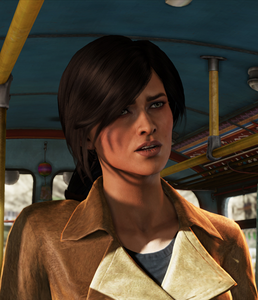 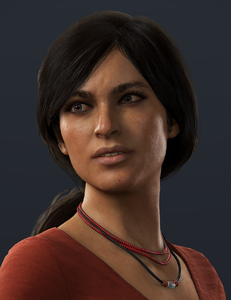 Chloe in Uncharted: The Lost Legacy. 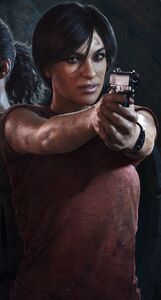 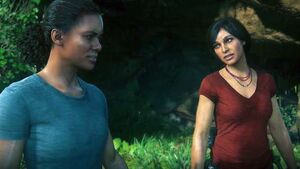 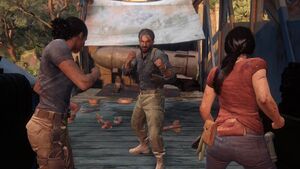 Chloe and Nadine vs. Asav. 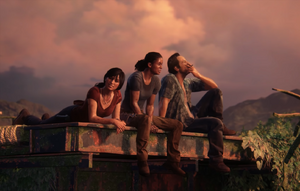 Chloe, Nadine and Sam after stopping Asav.
Add a photo to this gallery

Retrieved from "https://hero.fandom.com/wiki/Chloe_Frazer?oldid=2200873"
Community content is available under CC-BY-SA unless otherwise noted.