Hanging out with the Bears

Kid Genius
Chloe Park is a supporting character in We Bare Bears. She is a Korean girl who broke into the Bears' cave to gather information for her college report, before she eventually befriends them. Chloe skipped some grades, as she is a little girl prodigy, and is currently studying at the University of California.

She was voiced by Charlyne Yi, who also portrayed Chi Park and voiced Ruby on Steven Universe, another Cartoon Network original series.

Chloe is a little girl with short brown hair, and black eyes, leads the red glasses, and wearing a blue sweatshirt, is wearing dark pink pants and red shoes. She is usually seen with a yellow backpack similar to the one the Bears own, which holds her personal possessions. In her debut appearance, she had a faint yet still visible blush that disappeared by her next appearance.

Chloe is a shy, self-reserved girl that enjoys talking and hanging out with the Bears, but is generally socially awkward and has a hard time opening up to other people. Despite this, she is quite open to those she gets to know and has a fun time hanging out with them. She also appears to be incredibly intelligent, as she is in college, despite being 10 years old. At almost all times she maintains a strict focus on her class assignments and projects, something best expressed in her introductory episode, "Chloe".

In the episode "Chloe", Chloe is first seen breaking into the Bears' cave with a video camera, documenting their habitat. She looks around, taking note of their diet. She accidentally breaks a twig off Panda's chair. The Bears eventually arrive home and catch her. They tie her to a chair, shining Panda's phone light on her, mimicking an interrogative setting. Chloe's fascinated by Grizzly's poor dental hygiene, taking note of it on her notepad. The Bears go through her book bag and find a bag of Honey Wasabi Gummies and Grizzly tries to eat it with the wrappers on, but fail. She becomes annoyed. The Bears find her identification card trying to pronounce her name. Chloe is embarrassed and flustered, and takes her identification card. Chloe unwraps them and politely feeds them to the Bears, to which they demand more. Chloe proposes she'll supply more gummies to the bears if she were allowed to examine the Bears' daily lives. During her research, as she spends time with the Bears, they develop an open friendship.

Chloe finally finishes her report. She hurries out the cave for the last bus, forgetting her laptop. The Bears, upon reading her report, were insulted by the information provided. They rewrite the essay without Chloe's consent. The next day, the Bears drop the laptop off at Chloe's college before her presentation. When Chloe plays her presentation, it ends up being inaccurate and juvenile. Her professor is very displeased and disappointed. To save Chloe's grade from being marked as incomplete, the Bears step up and admit they were the saboteurs. Their presence sparks the interest of the students. They all start asking the Bears various questions about themselves, to which they answer every one of them. Their performance pleased Chloe's professor. Chloe was issued a sufficient grade on her report. She is last seen watching television with the Bears as the episode closes. 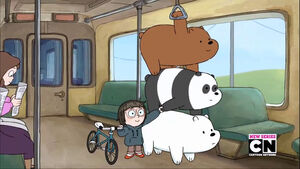 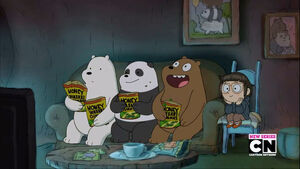 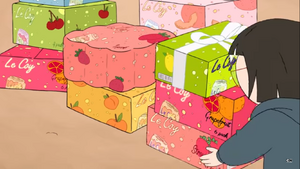