Chloe Elizabeth Price is the deuteragonist and anti-heroine of the 2015 video game Life is Strange and the main protagonist of the 2017 prequel Life is Strange: Before the Storm. She is a former student at Blackwell Academy and the childhood friend of Max Caulfield. She was the best friend of Max ever since early childhood before Chloe's father was killed in a car accident and Max moved to Seattle after her father got a new job there. Chloe was left bitter and angry at the loss of her father and the departure of her best friend and began a rebellious lifestyle. Two years later, Chloe met a girl named Rachel Amber and the two became best friends. Three years after that, Rachel disappeared, and Chloe reunited with Max and decided to find Rachel with Max, who she finds out has gained the ability to rewind time.

Chloe has a punk aesthetic, she wears pale blue ripped jeans with braces/suspenders, black boots, and a white shirt with either a skull or heart on it. She's always seen wearing her necklace, which is a chain with three bullets. Sometimes she wears a black leather jacket, and a dark blue beanie.

She has a tattoo sleeve on her right arm, an intricate design featuring flowers, butterflies, and a yellowed skull. Her dyed hair is light purple at the roots and blue at the ends.

Chloe's pajamas consist of light blue boxers and a navy T-shirt that says rock and has a chick on it.

Young Chloe wears pale blue jeans and a grey sweat shirt with the Arcadia Bay lighthouse on it. She wears her hair long and straight, in its natural strawberry-blonde shade.

Chloe is a stubborn, mischievous and rebellious girl. She is the archetypal punk-rocker, expressed in both her music taste and style. She loves to get high, drink beer, and can be described as bold and outgoing. She has a big mouth often making snarky comments, acts fearless and loves to take risks, which often gets her in trouble. She can be prone to angry outbursts, and has serious issues with abandonment and trust after her father's death, Max's move to Seattle, and the disappearance of Rachel Amber. Due to all her bad experience over the years, she has become pessimistic and resentful of life, convinced that there wasn't really anyone who actually cared about her or who she could trust in.

She sometimes is very insensitive to other people's feelings, and may act selfish and possessive, always wanting her loved ones' attention for herself and getting jealous and resentful if they don't spare their time for her or don't act her way. She can also be very irrational and irresponsible, which often takes the form of blaming others for situations out of their control and avoiding any responsibility of damage caused by herself (i.e, when she says to Max that if she doesn't blame someone else, it's her fault), which even takes the extent of blaming her dead father for her misery; but she will in some instances eventually acknowledge when she was in the wrong and apologize.

Nonetheless, Max is aware of Chloe's flaws but still cherishes her highly and considers her a "good friend who shows up when you need her". Chloe also is a very protective, devoted and faithful companion, though she tends to get too attached and obsessive. She is pretty straightforward with her (romantic) feelings for other people, and also very flirtatious and teasing. Despite her rough outward appearance, Chloe is actually a very insecure and scared person, and her tough acting may be nothing more than a facade she built up to protect herself from further harm.

Chloe very likely has to deal with depression caused by her experience of loss and abandonment, and it's implied that she suffers from insomnia and even had suicidal thoughts prior to Max's return. It's possible that her line "Rachel saved my life" literally refers to her preventing Chloe from committing suicide. She appears to show symptoms of a condition called Borderline Personality Disorder, as characterized by her trust and abandonment issues. During a conversation with Max in "Chaos Theory", Chloe is shown having a meltdown and expressing typical fears of someone who has BPD.

Chloe often drinks alcohol and smokes. She has had problems with drug addiction in the past, evident from her stepfather's comment about weed being a big deal for her, as well as her large debt with the drug dealer Frank Bowers. Although Chloe was smart enough for Blackwell, which is evident from Alternative Chloe's school report, she abandoned her studies. All these self-destructive character traits of Chloe, including her rebellion against authorities and her family, her drug abuse, her "boy toy phase" and the loss of control about her own life, which becomes apparent in her chaotic lifestyle and her lack of scholastic and occupational ambition as well as her refusal of responsibility, can be linked to her depression representing Chloe's way to deal with her desperation, to fill her inner void and to ease her pain. Also, her lack of sensitivity can be tied to her experience of loss and abandonment and her consequent depression.

During her time with Max, Chloe's personality seems to grow a lot, since she finds new strength in Max's support and the resurgence of their friendship. Although Chloe may not seem like that on the outside as it is hard for her to show those traits, as their story proceeds, she appears able to show a more caring and brave side to her. At the end of the game, Chloe admits her selfishness towards her family over all the years, and even offers to sacrifice herself to save the town from destruction.

Chloe was born in March 11th, 1994 in Arcadia Bay, Oregon to William and Joyce Price. She and Max (who's a year younger than her) were very close friends who used to always hang around each other and played pirates at their homes or in the woods, dreaming of their future and the adventures they would experience together. Chloe also used to have a cat named Bongo who died in 2008.

In the same year, Chloe's father was killed in a car crash by a speeding truck while he was driving to pick Joyce from the grocery store. Although Max was supportive at first, she had to move with her family to Seattle due to her father's job, leaving Chloe to deal with her grief all by herself. Chloe used to be a happy and cheerful girl but the loss of her father and then her best friend has gradually turned Chloe into a more resentful person. About 2 years later, Chloe's mother Joyce would marry David Madsen, whom Chloe immediately despised. From there, Chloe started getting more rebellious, hanging around with bad boys, taking drugs and running away from home, making the junkyard her "home away from Hell." She grew more and more frustrated with Arcadia Bay and conceived the desire to escape from her home town. Her emotional temperament took physical form, as she gradually changed her outward appearance to the punk-rock style of today. She often got into varying degrees of mischief and thus earned a bad reputation with the local police over the years.

Chloe originally had long strawberry blond hair before cutting it. She began to dye it some years ago during her time at Blackwell, starting with a chunk at first, as evident from a picture of her on her birthday with David and on her Blackwell Academy Record photo. Her hair gradually progressed from a large blue streak to entirely blue.

Life is Strange: Before the Storm 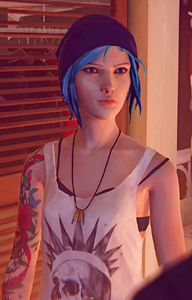 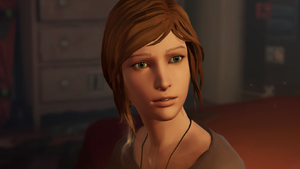 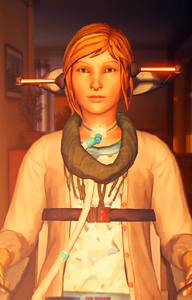 Chloe in the alternate timeline 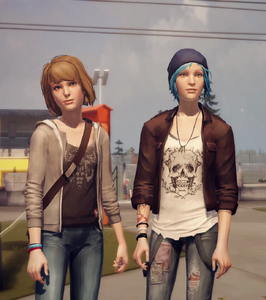 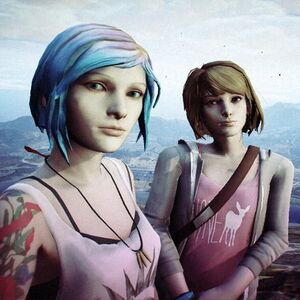 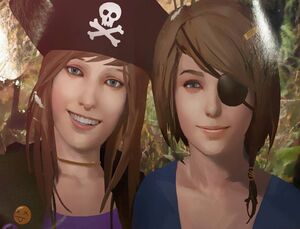