The Land Before Time II: The Great Valley Adventure

To save Chomper and Littlefoot from Ozzy and Strut (succeeded)

To save Chomper from Plated Sharptooth (succeeded)

While they are dangerous like many Sharpteeth, these two are fiercely protective of their only son.

In the second film, they search for their missing egg, stolen by Littlefoot and co thinking it was Ducky's unhatched sibling, which has now hatched into a baby which the protagonist Littlefoot and friends have named Chomper. Being carnivores, the parents are aggressive towards Littlefoot and his friends. By the conclusion of the film, they are reunited with Chomper, and are last seen chasing Ozzy and Strut in a fit of rage for capturing their son and Littlefoot and trying to kill them.

They return in the fifth film along with their son who they start to worry about him collecting herbs for Littlefoot and the gang. At the climax, they take on another extremely fierce Plated Sharptooth that was ambushing their son and his friends. The Plated Sharptooth was a formidable opponent, slashing at Papa Sharptooth's face with his finger claws and incapacitating Mama Sharptooth by cutting her leg with his toe claws much to Chomper's anger. Papa Sharptooth then re-engaged him and eventually managed to knock him off the edge of the cliff, sending him plummeting into the Big Water below. But the Plated Sharptooth swept Chomper with them in the process. Littlefoot dived into the water to save him and brought him back to shore. Mama and Papa Sharptooth, eternally grateful, spared Littlefoot and his friends from ever eating them before wishing them goodbye.

They are only Sharpteeth who are heroes (alongside Chomper). 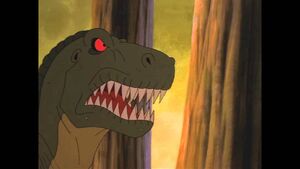 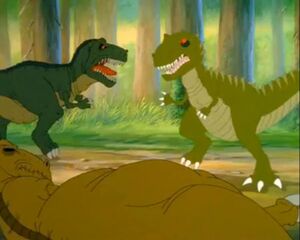 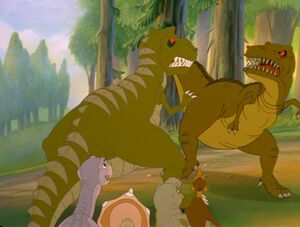 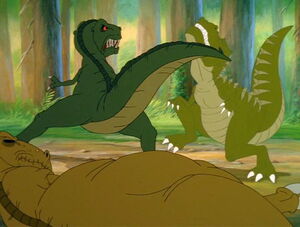 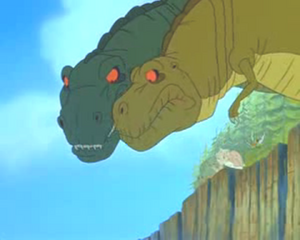 Chomper's Parents look down.
Community content is available under CC-BY-SA unless otherwise noted.