Note: This article is about Chomper, for the Plant Hero counterpart, see Chompzilla.

Goop
Burrow
Use of Spikeweed

Help the Players defend themselves from the zombies.

The Chomper is one of the main protagonists of the Plants vs. Zombies franchise. He is an anthropomorphic flytrap who takes parts of fighting zombies by eating them.

Chomper can be unlocked after the players completed Level 1-7. When planted, he eats a zombie in front of him, then chews it for a while.

Chomper returned in Plants vs. Zombies 2 is a Premium plant. He can be unlocked for $4.99 and was first introduced in Big Wave Beach. In this game, he chews zombies faster than the previous game. When Plant Food is applied, he sucks all zombies in a lane into his mouth, then instantly devours them. He is in Enforce-mint family, a family of melee plants.

He returned in the Garden Warfare series as one of the playable characters on the Plants' side. His primary weapon is Chomp.

In Plants vs. Zombies: Garden Warfare 2, a variant of him, Assistant Manager Bitey, is a playable character for pizza delivering quests. His primary weapon is Pizza Bites, and his only ability is Dough Toss (the ability that can help him fly in a higher altitude).

The Disco Chomper is a boss from Steve's quest Impsomnia, while the Toxic Chomper appeared as a boss in Super Duper Brainz's quest League of Awesome.

In Battle for Neighborville, he is a playable character of Attack class on the Plants' side.

In Plants vs. Zombies Heroes, Chomper is a Flytrap Plant of Solar class. He costs 4, with his rarity is Premium - Super Rare, and both of his strength and health are 2. When played, he destroys a zombie with 3 strengths or less.

After the malfunction of the Hero-Tron 5000, a Chomper turned into Chompzilla, one of the Plant Heroes.

In the original games, Chomper is vulnerable while chewing. Additionally, he cannot eat all zombies, such as machines and bosses.

Chomper appeared in the comics as one of the plants who support Nate Timeley and Patrice Blazing fighting zombies.

Diary of a Minecraft Zombie

He was mentioned in Bullies and Buddies by Zack, as the zombies were eaten by plants (referring to him). 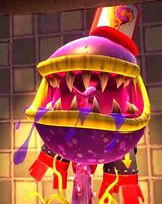 Assistant Manager Bitey
Add a photo to this gallery

Retrieved from "https://hero.fandom.com/wiki/Chomper_(Plants_vs._Zombies)?oldid=1757440"
Community content is available under CC-BY-SA unless otherwise noted.