He is voiced by Steve Blum who also did the voice of Enigma and Wolverine.

Chop Chop is a relentless, highly-skilled warrior who wields a sword and shield made of indestructible metal. He was once an Elite Guard amongst the ancient Arkeyan beings. The Arkeyans had created massive armies of synthetic soldiers, and the Elites were the most powerful of these. Like many of the Arkeyans, Chop Chop was created from a hybrid of elements - in his case, using undead magic and technology. Refusing to believe that his people disappeared, Chop Chop was scouring the kingdom seeking an Arkeyan leader for his next set of orders when Eon found and recruited him as a Skylander. 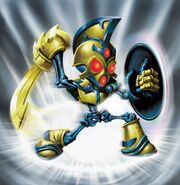 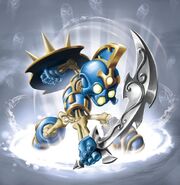