hanging out with Yakky Doodle.

To Protect Yakky Doodle From Predators

If he thinks that the only way to do this is to send Yakky away, he's willing to pretend he is not the duckling's friend anymore; otherwise, he's the best friend Yakky has.

Although he acts tough, in some ways he can be just as childlike as Yakky, such as when he wished he could fly like a bird.

Chopper's repeated line is "Now, ain't that cute", as well as saying "Now close your eyes, Yakky. You shouldn't oughta see what I'm going to do to this fox/cat" before beating up the Fibber or the cat. Another repeated quote is when Chopper feels guilty of having to turn Yakky away, and hopes that he didn't "hurt his feelings".

Chopper is a White Bull Dog, Wearing a Blue Tie. 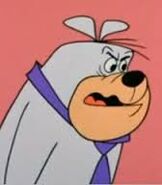