Aiding the Rebels
Maintaining the Ghost

Aid the Rebels to defeat the Empire

C1-10P, better known as Chopper, is an Astromech Droid owned by Hera Syndulla and one of the three tritagonists of the television show Star Wars Rebels. He is voiced by the series producer, Dave Filoni.

He has been described by the creators as being lazy, belligerent, rude, grumpy, and cantankerous as well as frequently ignoring his crew's orders and being much more content to do things his way. In contrast to the more lovable and openly heroic R2-D2, Chopper is a much more apathetic individual and nowhere near as easy a character to get along with. Nevertheless, he still serves as the repair-droid on the ship Ghost during it's fights against the Empire and is also very loyal in spite of his many flaws.

Due to the crew of Ghost having little in the way of resources, Chopper is cobbled together from a variety of pieces and as such is nowhere near as "sleek" as many later droid models, or even his fellow astromech R2-D2.

Chopper is a grumpy, sometimes selfish, and old droid who, according to Dave Filoni, is the "cat" of the Ghost crew. Though lazy and selfish, he still cares about his friends and helps them out when they are in immediate danger.

Due to his advanced age and lack of consistent maintenance, Chopper developed a sarcastic, and cranky demeanor. While Chopper got on well with Hera, Kanan, and Sabine, he had a fraught relationship with Ezra and Zeb; whom he often played tricks on. Chopper had a respectful relationship with Hera because she rescued him from a wrecked Y-Wing during the Ryloth campaign and adopted him, giving him more attention than her estranged father Cham. Unlike other astromech droids such as R2, Chopper did not care about being loved by the organics he worked with and seemed to dislike other astromechs. While he was always cantankerous, stubborn, and irritable, Chopper did have the crew's best interests in mind and would always help them during a problem, prompting his partners to forgive his personality quirks.

Chopper also had a mischievous and psychopathic streak which led him to sometimes endanger both sentient beings and other droids. On one occasion, he nearly caused the death of Ezra by knocking him off the Ghost in mid-air. Despite the incident, he showed no remorse and continued tossing jugs at him. Zeb suggested his personality flaws were due to damaged logic circuits. Later, he ejected from an Imperial communications ship, launching himself harmlessly into space but causing a group of Stormtroopers to be sucked into the void with him. Chopper appeared to particularly dislike other droids and never hesitated to cause them harm, whether his mission called for it or not. On one occasion, he became jealous of the Imperial courier droid 264 and threw him out of the Ghost in mid-air; he also knocked another Imperial droid into a sewer system and was in favor of destroying EXD-9 despite being under the impression that the Infiltrator was a mere protocol droid.

Despite his cantankerousness, Chopper was also capable of showing affection when it suited him. Despite their hostile first encounter, he grew fond of 3PO, after the latter complimented him for his polite "manners." In addition, Chopper also had a sense of team spirit and loyalty to his fellow rebels. On one occasion, his affection towards Kanan led him to join forces with Sabine, Zeb, and Ezra on a mission to rescue him. On another occasion, he refused to leave Sabine behind and persuaded her estranged friend Ketsu Onyo to rescue her from her derelict shuttle before it exploded.

Despite starting off on the wrong foot with Ezra, Chopper eventually developed a working, if somewhat uneasy, relationship with the young Jedi rebel. On one occasion, he rescued Ezra and Hondo from being killed by Azmorigan. While Chopper did not get on well with Zeb most of the time, Zeb still respected the astromech droid well enough to rescue him during a fraught mission to salvage medical supplies.

At times, Chopper could also be selfish and once allowed his desire for a new droid leg to get him stranded on Horizon Base. While Chopper had no friends due to his selfish and cantankerous personality, Chopper earned a friend in the form of the protocol droid AP-5. AP-5 came to regard Chopper as a friend after Chopper freed him from his restraining bolt, thus giving him the will to overcome his programming and to rebel against his Imperial superiors. Working together, the two droids hijacked an Imperial cargo ship and managed to find a safe world for the Rebellion to establish a base. Due to his experience of crash-landing in a Y-Wing, Chopper had a fear of the starfighters and refused to get one even several years after the Clone Wars.

Chopper and AP-5 shared a grumpy outlook and a rigid adherence to schedules. Chopper once suggested that Sabine needed a change in attitude when she remarked that he and AP-5 came from the same assembly line. Chopper's pride in his technical and repair skills once led him to fight with R3, who was equally territorial and protective of his ship Sato's Hammer. Still, the two bonded after working together to remove a Magno-mine from the Iron Squadron's ship.

Chopper's laziness led him to opt out of helping AP-5 catalogue the munitions inventory. Later, he attempted to opt out of helping Zeb inspect a damaged sensor beacon in Sector 6. Still, Chopper was smart enough to "choose between the lighter of two chores." Chopper's unfriendly nature led him to object to Zeb adopting the stray droid EXD-9, who turned out to be an Imperial Infiltrator Droid. Despite his uneasy relationship with Zeb, Chopper had enough sense of team spirit to help his comrade fight off EXD-9.

Chopper's cantankerous nature once led him to argue with AP-5 during a mission to steal clearance codes from an ISB base on Killun 71. He resented the fact that AP-5 was given the mission instead of him. Chopper was also known to sulk when things did not go down his way. He was unable to resist Imperial programming and almost killed his comrades on one occasion. However, Chopper's rebel comrades managed to save him from himself and remove the Imperial programming. After realizing that he had pushed AP-5 into space, Chopper was apologetic. However, he was insulted when AP-5 sarcastically did not accept his apology and struck him and Antilles in frustration.

Despite his uneasy relationship with Ezra, Chopper beeped in agreement when Ezra told Clan Wren they would be returning to Atollon if the Clan was unable to render the rebels assistance. 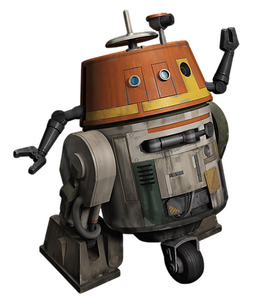 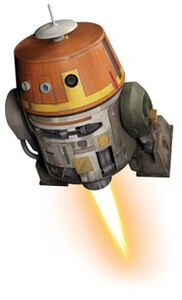 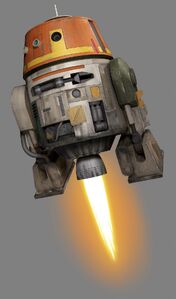 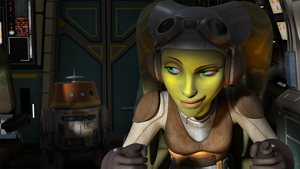 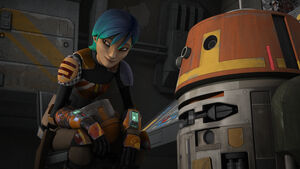 Chopper and the Lothal Rebels with Saw Gerrera 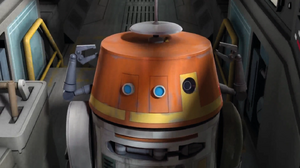 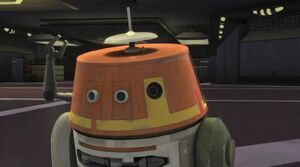 Chopper (far left) in Rogue One: A Star Wars Story 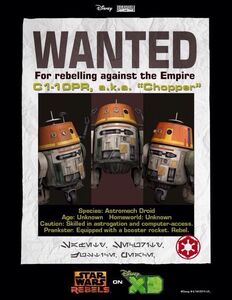 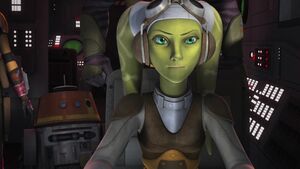