When Kan'u was fighting the Tō army, she fought alongside Chōun for a while; when this war ended, Chōun met Kazuto and took a liking to him, promising to join his army later.

She joins alongside Kōchū after the battle with Enshō. She has a strong obsession of menma of all kinds. She also has a habit of running around the city as the masked hero of justice 'Butterfly Mask' in her patrol shift.

Strangely, no one other than Kazuto and Shuri can recognize her true identity, despite only wearing a mask and her fighting style recognized. Furthermore, Chōun herself doesn't recognize how obvious her disguise is to Kazuto. Despite her seductive front, she's surprisingly pure which shocks Kazuto at times. 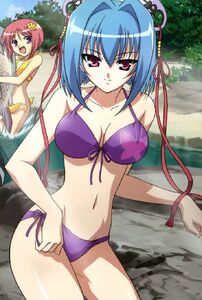 Retrieved from "https://hero.fandom.com/wiki/Chouun_Shiryuu_(Koihime%E2%80%A0Musou)?oldid=1910718"
Community content is available under CC-BY-SA unless otherwise noted.