During the summer of 1999, the WWE Universe spent weeks wondering about a millennium clock that counted down on Raw. They got their answer on Aug. 9, when the clock struck zero and Y2J appeared. Audaciously interrupting The Rock, the confident new competitor immediately announced himself as a Superstar who wasn’t afraid to make a statement.

Son of former NHL standout Ted Irvine, Jericho was born in Manhasset, N.Y., but raised in Winnipeg, Manitoba, Canada. A wrestling fan from an early age, he trained in the famed Hart Family Dungeon and made his ring debut when he was only 19. Starting out in the frigid armories of Canada, Jericho went on to perform across the globe in places like Mexico and Japan, infusing different international styles into his repertoire along the way.

After reaching new prominence in ECW, Jericho reached WCW in 1996, winning multiple championships with a growing legion of loyal “Jerichoholics” in his corner. Growing frustrated with the locker room politicking that plagued the company, he sensed a brighter future in WWE, and broke the walls down on Raw with his thrilling arrival in 1999.

Where some people would crack under the weight of such a hyped debut, Jericho reveled in it. Over the next decade, The Ayatollah of Rock 'n' Rolla grabbed a record nine Intercontinental Titles, seven WWE and World Tag Team Titles and multiple Slammy Awards, all while using his controversial show “The Highlight Reel” to drive his numerous adversaries absolutely bananas. And perhaps the crowd jewel of his impression six World Title reigns came on Dec. 9, 2001 at Vengeance, when he beat The Rock for the WCW Title and “Stone Cold” Steve Austin for the WWE Championship to earn the distinction of being WWE’s first Undisputed Champion.

Jericho has left and returned to WWE on several occasions. During his various hiatuses, he has pursued acting, toured with his heavy metal band Fozzy and penned several books about his remarkable career. Before long, though, the thrill of competition and the desire to be a champion drives him back to the ring, as it did during the June 30, 2014, edition of Raw when he crashed The Miz’s homecoming boast session. Y2J was, in turn, interrupted by The Wyatt Family, who savagely assaulted the re-emerging Superstar.

Jericho retaliated, thanking The Wyatts for reminding him that he is all about survival. Though Bray Wyatt has alluded to Jericho's cult of personality, he's drawn parallels between the two as self-proclaimed saviors.

As the electric personalities collided at Batteground, Jericho certainly faced an uphill battle. Nevertheless, his experience reigned supreme as he managed to execute a perfectly timed Codebreaker for the win.

But, Bray Wyatt overcame Chris Jericho at SummerSlam – despite the fact that his disciplines Luke Harper & Eric Rowan were banned from ringside. When the action moved outside the ring, The Eater of Worlds hit Y2J with an earth-shattering Sister Abigail into the ringside barricade, before delivering an encore of the frightening maneuver in the center of the ring for the three-count.

Nevertheless, the animosity between Jericho and Wyatt continued and both Superstars were ready to settle the score inside a steel cage on the season premiere of Raw. Following an intense battle, one that saw Y2J execute a gravity-defying cross-body from the top of the cage, Wyatt managed to escape the cage and claim victory once more. Later that night, Randy Orton attacked an injured Jericho in the trainer's room, setting the stage for their battle at Night of Champions. Jericho tried to use his high-flying know-how to defeat The Viper, but got caught mid-air with an RKO that gave Orton the victory. 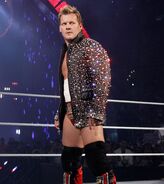 Chris Jericho in WCW
Add a photo to this gallery
Retrieved from "https://hero.fandom.com/wiki/Chris_Jericho?oldid=1930390"
Community content is available under CC-BY-SA unless otherwise noted.