Relaxing at the Beach

Partying in the Club
Samba

Save her Grandpa from His Illness (Failed)

Christie Monteiro is a character and a heroine of the Tekken video game series. She made her first appearance in Tekken 4 and came back for all later versions. She is the granddaughter of the teacher who taught Eddy Gordo Capoeira.

She was voiced by Marina Inoue in the Japanese version, and by Xanthe Smith and Lisle Wilkerson in the English version.

Eddy looked for Christie shortly after his return from the King of Iron Fist Tournament and taught her the art of Capoeira, as he had promised his master. After only two years of tutelage, Christie become an impressive fighter.

But shortly after, Eddy suddenly disappeared, leaving Christie with the words "Those responsible for my father's death must pay."

Disturbed by his sudden and mysterious disappearance, Christie continued to Eddy. Her only clue was the King of Iron Fist 4 tournament.

Christie's grandfather was released from prison after a long incarceration. Unfortunately, he was diagnosed with an incurable illness, and he was given only six months to live, but a cure might be possible with possessing the technology from the Mishima Zaibatsu. Several days later, Christie learns of The King of Iron Fist Tournament 5. She sees it as a chance to save her grandfather, believing that if she possesses the advanced technology of the Mishima Zaibatsu, she may be able to find a cure for him.

Christie entered The King of Iron Fist Tournament 5 hoping to save the life of her paternal grandfather. She was defeated and returned home. Upon her arrival, she finds out that not only has her grandfather gone missing, but Eddy as well.

Ending Description: Christie stands at the foot of her grandfather's grave with tears running down her cheeks. Eddy eventually appears, and he gets slapped across the face by Christie for his prolonged disappearance, but holds on to him for comfort. Eddy then clenches his fists and throws away a ring, which signifies his affiliations with Mishima Zaibatsu and leader Jin Kazama. 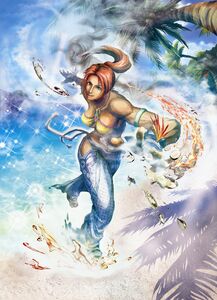