Christine Daaé is the main character and the female protagonist in Gaston Leroux's 1910 novel The Phantom of the Opera (the film adaptations of the same name, the musical adaptation and its musical sequel Love Never Dies), the young singer with whom the main character Erik falls in love.

Christine Daaé was born just outside of Uppsala, Sweden. Her mother died when she was six years old, and she was brought up by her father whom the novel refers to as "Daddy Daaé", traveling to fairs where he played the violin and she sang. They were discovered there by Professor Valérius, who took them to Gothenburg and then to Paris, providing for Christine's education. Christine was extremely close to her father, who told her Scandinavian fairy tales. A story featuring an "Angel of Music" was her favorite. Christine's father passed away a few years after her mother, leaving her grief stricken despite the loving care of her "adopted" mother Madame Valérius.

She enters the Paris Conservatory and trains for four years to become a professional singer to honour her dead father and please Madame Valérius, but has lost all passion for singing.

When Christine arrives at the Opera Garnier, she becomes one of the numerous singers at the Palais de Garnier. Although considered by many, because of her lack of passion for singing, as "sounding like a rusty hinge," one person finds the beauty still hidden in her tone: Erik, known and feared as the mysterious opera ghost.

When Erik begins to tutor Christine, he tells her that he is the Angel of Music that her father had spoken of. Christine believes him, and he inspires her soul back into her voice. Christine debuts at a gala at the opera, after the singer Carlotta falls ill and she is asked to take her place, her singing is described as "seraphic". 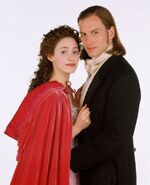 Christine and Raoul
Add a photo to this gallery
Retrieved from "https://hero.fandom.com/wiki/Christine_Daa%C3%A9?oldid=1622514"
Community content is available under CC-BY-SA unless otherwise noted.