Nicodemus West
The Ancient One †
Wong

Doctor Christine Palmer is a fictional character in the Marvel Cinematic Universe, appearing as a supporting character in the 2016 film Doctor Strange, and a minor character in its 2022 sequel, Doctor Strange in the Multiverse into Madness. She is a doctor and surgeon who works at the Metro-General Hospital, and is a colleague and ex-girlfriend of Stephen Strange.

She is pivotal as she remained one of Strange's most loyal friends, and her words affected him, who became a better person after joining the Masters of Mystic Arts. Due to Strange's duties with the mystic arts, Palmer's relationship with him never truly reconciled, and she moved on with a man named Charlie after surviving the snap. In 2025, Christine and Charlie married and Strange attended the ceremony, but their reception was interrupted by the arrival of Gargantos.

She is portrayed by Rachel McAdams, who also played Jessica Spencer in The Hot Chick, and Lisa Reisert in Red Eye. McAdams reprised her role and voice for a different version of the character in the Disney+ animated series What If...?, where she also voiced a disguised Strange Supreme in "What If... Doctor Strange Lost His Heart Instead of His Hands?"

Not much is known about Christine Palmer's past, but she became a doctor and physician and presumably received her degree from an unnamed college. Receiving a position at the Metro-General Hospital in New York, Christine would become an exceptional surgeon, and became colleagues to Stephen Strange Nicodemus West. She began a romantic relationship with Strange, and would attend his talks, but admitted that she didn't enjoy them since they were all about him. Strange's self-obsession and ego started to sour her relationship with him, and she decided to end their romance and create a policy in which she wouldn't date any of her colleagues. Despite this, Christine remained one of Strange's closest friends, managing to put up with his narcissism while working at Metro-General. By 2016, Christine had West as her on call neurosurgeon, but would sometimes ask for Strange's opinion when dealing with patients.

After helping Strange work on a patient that was considered brain dead by West, Palmer attempted to persuade Stephen to become her on call neurosurgeon, but he declined due to his arrogance. She then rejected his invitation on going to one of his talks, telling Strange that only he had fun since the talks were always about him. When Stephen survived a car accident, Palmer brought him into surgery, and stayed at his side while he underwent surgery by West. Once Strange awoke, Christine informed him about his injuries, and that West did the best he could on fixing his hands despite Stephen thinking other wise. She remained as Strange's greatest support as he attempted to heal his injuries by going through different operations and other techniques, which were to no avail.

Seeing Strange waste his attempts to fix his hands, Palmer attempted to convince Stephen to stop wasting his money on trying to fix his hands. She only found Strange insulting her, and not wanting to see him suffer no longer, decided to leave as he decided to travel to Kamar-Taj after hearing rumors of Jonathan Pangborn. One year later, Christine reunited with Strange, who was bleeding heavily from injuries sustained during his battle against the Zealots. When preparing to perform surgery on him, he went into the astral dimension, and proceed to show himself so he could assist her in performing the surgery. After helping him recover, Strange apologized to her for his actions, and informed her about his journey in Kamar-Taj and becoming a member of the Masters of the Mystic Arts.

Christine would encounter Strange again that same day when he came to the hospital with the Ancient One, who was dying from injuries received from Kaecilius and the Zealots. Despite their attempts, the Ancient One passed away, as she had finally accepted death after decades of surviving from dark magic. As Strange had to leave to stop the Zealots, Christine parted ways with her colleague as she was called into the ER.

Christine survived the decimation caused by the mad titan Thanos, and presumably remained a surgeon at Metro-General. During the five years, Palmer met a man named Charlie and the two fell in love.

By 2025, Christine and Charlie decided to get married and had Stephen and Nicodemus attend the ceremony. At the reception, Christine and Charlie witnessed Strange and his allies fight against Gargantos. Though Christine remained on Earth during Strange's journey across the multiverse, he was assisted by a variant of Palmer that was a scientist for the Illuminati. 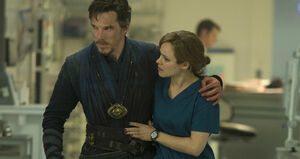 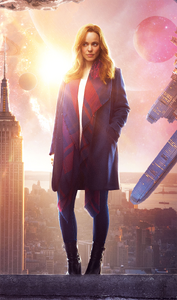 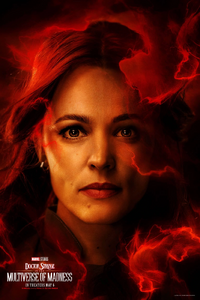 Christine's character poster for Doctor Strange in the Multiverse of Madness.