Christopher is a character from Bakugan Battle Brawlers, his guardian Bakugan is Juggernoid. He is a young Brawler in the series.

He was voiced by Ayumi Fujimura in the Japanese version, and by Alexander Conti in the English dubbed version.

In The Secret of Success, Christopher was seen by Alice Gehabich when she was shopping by the lake about to throw his Bakugan into it. Alice tries to stop him, but accidentally pushed him into it. Alice tries to help him beat his rival Travis. After Alice taught him how to be a better battler, Christopher beat Travis in a battle. He may have a crush on Alice. Christopher also tries to help Alice fight Rabeeder, alongside Klaus von Hertzon, whom he idolizes. He gained many helpful tips from Klaus and he was able to help him win since Alice's Alpha Hydranoid was being encased in crystal at the time. Christopher also was seen in episode 33 helping Alice. 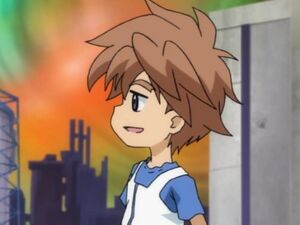