Helping his friends.
Spending time with his friends (including Winnie the Pooh).

To spend time with Pooh and his friends.

Christopher Robin is a very major character created by A. A. Milne. He appears in Milne's popular books of poetry and Winnie-the-Pooh stories and is named after Christopher Robin Milne, the author's son. The character has subsequently appeared in Disney cartoons.

Christopher Robin appears in Milne's poems and in the two books: Winnie-the-Pooh (1926) and The House at Pooh Corner (1928). In the books he is a young boy and one of Winnie-the-Pooh's best friends. His other friends are Eeyore, Kanga and Roo, Rabbit, Piglet, Owl, and Tigger. He is characterized by his uneven socks. In the second book, there are hints that Christopher Robin is growing up. In the final chapter, the inhabitants of the Hundred Acre Wood throw him a farewell party after learning he must leave them soon. It is implied that he will attend boarding school; Christopher Robin Milne, for whom the stories were originally developed, left home to attend Stowe School at age 9.

In addition to the two Pooh books, the character was immortalized in other works by A. A. Milne including two books of poems: When We Were Very Young (1924) and Now We Are Six (1927). An arrangement of one of the poems, Buckingham Palace, was first recorded by Ann Stephens in July 1941. Petula Clark released a recording of it in 1953 to coincide with the coronation of Queen Elizabeth II, and despite neither making the charts, both versions were popular on BBC radio's Children's Favourites programme.

In the 2009 sequel Return to the Hundred Acre Wood, it is confirmed that Christopher Robin was at school, but during the summer break he returns to the forest for a visit with a lot of knowledge to share. Though slightly older, he is still the same person as before and is happy to share more good times with his friends all summer. At the end of the summer, he has to leave again for another school year, but the animals know they will see him again.

Christopher Robin is cheerful, compassionate, adventurous, fun-loving, imaginative, smart, and helpful. Despite being a child, he is much wiser and more mature than many of the other characters, and is someone Pooh and the others look up to. In the book illustrations, his house appears as a hollow tree with a door at the top of the forest.

Since 1966, Disney has released numerous features starring Winnie the Pooh and related characters. Christopher Robin appears in all of the Disney adaptations except for Kingdom Hearts, Welcome to Pooh Corner, Boo to You Too! Winnie the Pooh, Springtime with Roo, and Pooh's Heffalump Halloween Movie. But in most of the cartoons, he is only a supporting character, sometimes only appearing in a few scenes or episodes; in Pooh's Heffalump Movie, he only appears during the credits. His personality is virtually the same as in the books, but he attends day school instead of boarding school.

Christopher Robin's bedroom, but not Christopher Robin himself, appears in live-action opening sequences. In the world within his storybooks, his house appears just as it does in E. H. Shepherd's illustrations. The New Adventures of Winnie the Pooh re-imagines him as an American boy living in the suburban house 100 Acre Road whose backyard connects directly to the Hundred Acre Wood. His mother also appears in the series and Robin is apparently their surname in that continuity. Some of these elements were reused for The Book of Pooh, but the animals are once again characters in Christopher Robin's storybook. His hollow tree house does not appear from both series.

Christopher Robin has appeared on House of Mouse with his friends, but he is the only main Winnie-the-Pooh character not to appear in the Kingdom Hearts video game series; in this continuity, the Winnie-the-Pooh book belongs to Merlin and Christopher Robin's role is played out mostly by Sora. He only appears in two episodes of My Friends Tigger and Pooh. His appearance was updated for the 2011 film.

Christopher Robin appears as the titular protagonist of the 2018 live action film of the same name. In this film, he is depicted as an adult with a wife and daughter and will reunite with Pooh and his friends. The film depicts Christopher Robin as being English as opposed to American, and living in the 40s instead of in a more modern era. The film also confirms that "Christopher" is his first name and "Robin" is his last name. 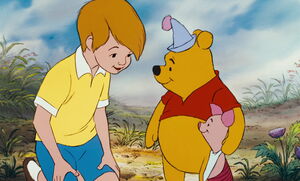 Christopher Robin with Pooh and Piglet 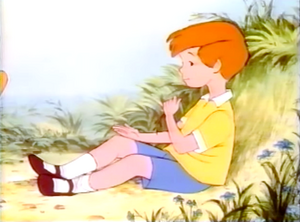 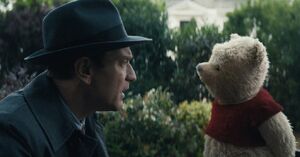