Help Sonic and his friends stop Dr. Eggman from conquering the planet

Christopher "Chris" Thorndyke is the deuteragonist of the Sonic X anime series. He is the 12 year old only son of a wealthy father and mother, however he is very lonely due to the fact that his parents are always busy.

Chris met Sonic the Hedgehog when he was drowning at the bottom of Chris' family pool (due to the fact that Sonic cannot swim). After befriending him, they went on multiple adventures together and had a practically unbreakable bond. Eventually, when Sonic had to go back to his home world to prevent the two dimensions from merging, Chris turned off the portal before Sonic could go in and ran off with him, unwilling to let his new friend go. Chris had some sense talked into him by Sonic and he was last seen being carried off by Sonic back to his parents before Sonic went home.

Even though Chris was received positively well in Japan, he's often disliked by Western audiences, as he's often criticized for taking key roles that belonged to the other characters such as Tails' role as Sonic's sidekick, Amy's role in convincing Shadow the Hedgehog to give up on destroying the Earth in the Sonic Adventure 2 arc, and having more screen time than all of the characters in the anime including Sonic despite Sonic being named after the title of the anime.

Sonic the Hedgehog is Chris’ best friend. Chris first met Sonic when he crash-landed into the pool of the Thorndyke Mansion, and at first, he had to keep the fact that he saved a blue, talking hedgehog a secret by saying that Sonic was a cat, unfortunately for Chris, his grandpa Chuck discovered Sonic and suspected he was a robot. However, he later proved instrumental in helping to rescue Sonic’s friends and finding the Chaos Emeralds. Sonic and Chris quickly formed a close bond that turns into an everlasting friendship that not even seperate worlds can break. Like Tails, Chris is as close to Sonic as a younger brother would be. Sonic had always been there when Chris really needed it, as Chris admits in Episode 51 when he says to Sonic: “You have always been there for me”.

Chuck is Chris’ grandpa and the father of Nelson Thorndyke. He is an inventor who likes Tails and also likes building things.

Danny is Chris’ childhood friend and helped Sonic and the other a few times in the first season. In the Archie Comics he and Chris are shown to be on the same team.

Frances is another close friend of Chris who helped Sonic and the team out in the first season. She is seen as a tomboy and enjoys poking fun at Chris and Danny.

Helen made her mark in episode 14 when Sonic declined a party at the White House to spend time with her the entire day and take her to an island with beautiful flowers. This made Jerome Wise, the President’s former secretary (he was later fired for talking with Eggman in episode 21) go berserk, and he called military forces to get Sonic, putting Helen in danger. At Helen’s house, she told her parents the whole story. Her father, Doug said he would take her there, but he couldn’t because he was working at a grocery store. Her parents were often at work, but they were later spending more time with her, unlike Chris. Helen did not make another appearance in season 1, but was featured in episode 26, the last episode in season 1, when Chris was being held hostage by Eggman, so Chris’ classmates, Danny and Frances, were spending time with her instead. Helen appeared more often in season 2, specifically when she and her parents ordered a sunshine ball before it went out. When she is older, she is seen dating Chris.

Not much can be said about Chris's relationship with Knuckles the Echidna except that the two get along well enough. After Chris gets captured by Eggman due to Knuckles believing his lies in episode 25, Knuckles makes it his objective to find and rescue Chris. Throughout the series, Knuckles is shown to be concerned for Chris's safety such as when they entered a fighting tournament, Knuckles refused to fight Chris in the Quarter-Finals because he did not want him getting hurt, and also, Chris was concerned that he would be facing Amy or Rouge in the Semi-Finals if he won, resulting in Chris forfeiting the match.

Lindsey is Chris' mom, and is very busy due to her job as a movie star, usually recording her movies at the sound stages in Filmdom City. Nevertheless, she still loves Chris deeply, and when she was told that Chris was sick, she dropped everything to rush home to be with him once Nelson came to pick her up in his company helicopter.

Chris and Miles "Tails" Prower are good friends throughout the first two seasons and are seen riding in the X Tornado together. Chris helps Tails give Sonic Power Rings when Tails is too busy to do so. In season three Chris and Tails become closer friends due to Chris being an accomplished scientist in the season and having more to relate to now. Tails comments that Chris reminds him a lot of Chuck now.

Sam Speed is s Christopher Thorndyke's maternal uncle. Sam came to the rescue of Chris and his friends in Station Square, which was being attacked by the Egg Fort. Sam also sported a rivalry with Sonic after their first encounter when Sonic was able to outrun Sam and the Speed Team, so Sam hopes his nephew will let him have a rematch when possible.

Chris takes an interest in Shadow the Hedgehog especially when he returns after supposedly sacrificing himself to stop the ARK from hurtling into the earth. Shadow does try to hurt Chris at one point, but Chris is rescued by Rouge, who later abandons him and then Chris must be rescued by Knuckles. Although at times Chris has shown signs of dislike for Shadow, he has also shown signs of liking him. Chris kept Shadow's Limiters until Shadow came back and Chris returned them to him. Chris did as well shed one tear when he learned Shadow was supposedly dead. Chris also convinced Shadow that Maria would want him to help people before Shadow lost his memory. Chris also reminds Shadow of Maria.

Amy Rose is another one of Chris's friends, the two tend to get along quite nicely, but when Sonic gets in the mix, Amy tends to become annoyed. At one point, she even threatened to hurt Chris if Sonic didn't come out of hiding, although it is later revealed that she didn't mean it seriously. Chris and Amy have both admitted to being a bit jealous of Sonic's freedom to do anything at any time.

Chris, however, does have some fear of Amy, as he forfeited a karate match with Knuckles as the winner would then face either Amy or Rouge, as they were in a martial arts tournament for a Chaos Emerald.

Cream the Rabbit is also one of Chris's friends, they are seen tagging along together in some episodes and are generally friendly to each other. Despite this, in episode 7, Cream gets mad at Chris after he makes a comment about how his mom is rude to leave the party without telling the guests. Cream is upset because she overheard his mom crying about how she is never able to be there for him and that Cream can't see or even talk with her on a phone with her mom since she is back on Sonic's world. Later, Cream forgives Chris and makes him a crown of flowers which, according to Sonic, is something that she only does for people she really likes.

Mr. Stewart is the substitute teacher for Chris' class at Station Square Elementary School. Chris is unaware that Mr. Stewart is an undercover agent for G.U.N. to keep an eye on Chris since he befriended Sonic and his friends. Nevertheless, the time Chris spends with Mr. Stewart causes him to develop a good reputation with Chris and his classmates until he is reassigned by G.U.N. following the events with Perfect Chaos.

Nelson is Chris' father, and the CEO of the aptly-named Thorndyke Industries, a busy manufacturing company. Despite his busy schedule as the head of his company, he still makes time for Chris. When he learned Chris was home sick, he dropped everything to pick up Lindsey and rush straight home to be with Chris.

Cosmo is a friend of Chris as well, they get along pretty well. Cosmo starts to look up to Chris after he nearly succeeded in rescuing her from Black Narcissus during which time Chris tells Cosmo that she reminds him a lot of himself before he met Sonic. Like the others, Chris is greatly saddened when Cosmo sacrifices herself to save the Galaxy. 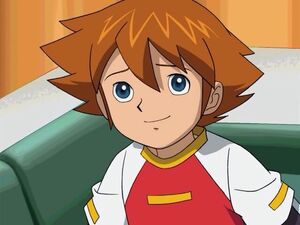 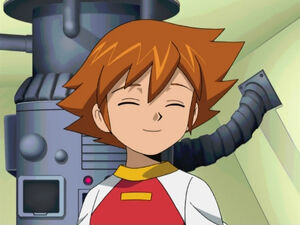 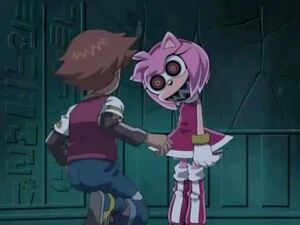 Confrontation with a Boom-possessed Amy Rose. 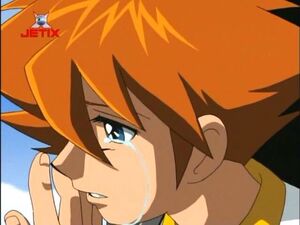 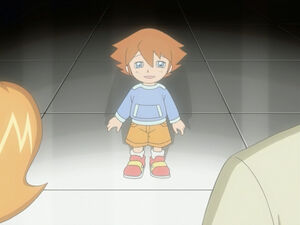 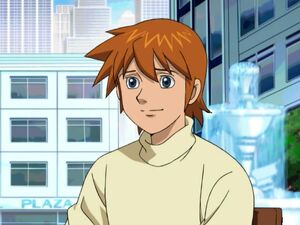