Hanging out with Brad (formerly), but later Alan (currently).

Christy Fimple is the deuteragonist of Small Soldiers. She later becomes Alan Abernathy's girlfriend after all of the Commando Elite including Major Chip Hazard were destroyed by the EMP Blast except for the Gorgonites.

She was portrayed by Kirsten Dunst, who also played Judy Shepherd in Jumanji and Mary Jane Watson from the Raimi Spider-Man trilogy.

Christy is Alan's next-door neighbor. She is first seen at Alan's dad's toy shop while she and her little brother, Timmy are shopping. She sees the Gorgonites and the Commando Elite action figures that can talk and move.

After the Commando Elite awaken from their boxes and destroy Alan's dad's toy shop and Alan filling a complaint about his dad's store. Major Chip Hazard while intercepting one of Alan's calls to Christy, one which she explains her current relationship with Brad, an older boy.

Major Chip Hazard and his troops were aware of Alan's interest of Christy, the Commandos decided to invade Christy's house, transform Christy's collection of Gwendy dolls into his female army.

Christy gets captured after her date with Brad, with Brad fleeing the house failing to save Christy. The Commandos tie her to a chair and duct tape her mouth shut. Afterwards, they send Alan and Archer a videotape of her being held hostage, prompting them to save her.

Alan and Archer manage to free her and after Christy kissed Alan twice for rescuing her, the three are chased by the Commando Elite in heavily armed customized vehicles, in the result of Major Chip Hazard losing his men and being deemed to Alan, Archer and Christy that he was destroyed.

The Gorgonites flee the house and they begin to attack the Commandos and Christy watches as Chip attacks Alan as he tries to creat an EMP to wipe out the Commandos for good. Archer tries to fight Chip but fails. However, Alan manages to destroy Chip by jamming him into the powerline and triggering an EMP blast which destroys all of the Commandos and the Gwendy dolls once and for all.

Alan sends Archer and his Gorgonites out to find Gorgon in a large toy boat and he wave goodbye to them. Alan and Christy continued dating at the end of the film. 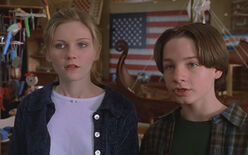 Christy Fimple bound and gagged by the Commando Elite.