Captain of the Shepherds
Exalt of Ylisse

Defeat both Grima and validar

Legendary Hero
Chrom (クロム Kuromu), the prince of the Halidom of Ylisse, is the main protagonist of Fire Emblem: Awakening.

He is the direct descendant of the Hero King Marth and the eventual father of the tritagonist, Lucina.

Together with Frederick and Lissa, Chrom finds Robin lying on the ground. Chrom helps them up and is surprised when the Avatar knows his name. Robin cannot remember anything about themselves though, which makes Frederick suspicious and Chrom decides to bring Robin to the capital of Ylisse to decide who they are and whether [Robin] is a threat or not.

During their way to the capital, the group encounter a band of bandits plundering a town. Chrom fights them and Robin helps which makes Chrom trust them. Together they defeat the bandits.

Later, on the night, Chrom and Lissa encounter a new threat: Risen. Two Risen attack them. Chrom manages to kill one and the other almost kills Lissa who is saved by a mysterious character named "Marth". Frederick and Robin arrive and they fight off the rest of the Risen with the help of one of Chroms soldiers: Sully and an archer named Virion. Afterwards, they reach the capital and Chrom attends to a meeting with his sister Emmeryn, exalt of Ylisse. Chrom recieves a mission: to take his group of warriors, the Shepherds and ask for help against the threats against Ylisse from the nation Ferox. Chrom also makes Robin the tactician of the Shepherds.

Chrom and the Shepherds encounter more Risen which they manage to defeat. When they reach a Feroxi fortress they are stopped by Feroxi soldiers who thinks that they are bandits. Chrom almost gets hit by spears when the fight between his shepherds and the Feroxi starts but is saved by one of his warriors Sumia.

The Shepherds defeat the Feroxi and reveal themselves to not be bandits. They are escorted to one of the two khans of Ferox, Flavia who promises to aid them if they help her become the ruling khan of Ferox through winning a fight against warriors fighting for the opposing khan Basilio. Chrom agrees and one of their opponents are revealed to be the same "Marth", who saved Lissa before. Chrom is surprised to see that this swordsman has a Falchion, a sword that only he himself wields.

Chrom and his shepherds win the fight however and "Marth" departs while Flavia gets the throne. Basilio, despite losing his position as ruling khan gives away his best warrior, Lon´qu to Chrom's shepherds. Then Chrom departs back to Emmeryn.

Chrom appears in Project x Zone 2 alongside Lucina as a pair unit.

Descendant of the Hero-King Marth and prince of the Halidom of Ylisse, a country that worships the divine dragon, Naga.

He wields the legendary sword Falchion, a weapon passed down through the line of kings. He is also the captain of the Shepherds, a militia that he established to defend the kingdom.

He is currently fighting to defeat the Risen that have appeared in each region and to prevent the ambitions of the Grimleal. This dark cult is dedicated to the Fell Dragon Grima, a monster who promises to bring about the end of the world.

Chrom is a brave youth with a strong sense of justice and deep affection for his allies. He was initially shaken after learning the truth about Lucina, but now he views her simultaneously as a trustworthy companion and as his beloved daughter.

He trains daily with his sword, which often results in considerable destruction to the general vicinity. 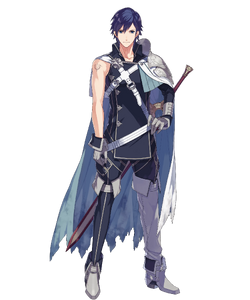 Portrait of Chrom in Fire Emblem Heroes, illustrated by Ebila 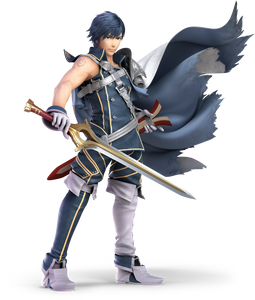 Chrom in Super Smash Bros. Ultimate
Add a photo to this gallery

Retrieved from "https://hero.fandom.com/wiki/Chrom?oldid=1760375"
Community content is available under CC-BY-SA unless otherwise noted.