Spoiled Sweet Charismatic Leader
ChuChu is the leader of the band Plasmagica.

She is voiced by Sumire Uesaka in the Japanese version, and Alexis Tipton in the English, the latter of whom also voices Inori Yuzuriha, Ikaruga, and Musubi.

She is a pink bunny Myuumon with a white muzzle and long curly lavender hair. She wears a pleated black corset dress with a lavender accents and a purple leather belt. She also has a white shirt collar tied with a large purple bow and black high heeled boots with purple socks. Her eyes are purple, pink in her humanoid form.

ChuChu is the leader of the band Plasmagica. She is another guitarist and vocalist of the group. Though she is secretly working on becoming a solo artist, she is still on good terms with her other bandmates. She is also a very good student.

In the anime, ChuChu meets Cyan after the latter falls through the portal into Sound World, and along with Moa and Retoree becomes fast friends with her. She is shown to be the most motherly of the band members. 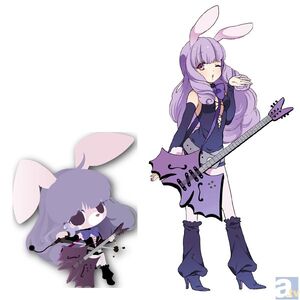 Retrieved from "https://hero.fandom.com/wiki/ChuChu_(Show_by_Rock!!)?oldid=1700612"
Community content is available under CC-BY-SA unless otherwise noted.