Start a Wiki
Charles "Chuck" Billy (Chico Bento, in the original) is the main and titular character of Chuck Billy 'n' Folks, comic series based on Monica's Gang franchise.

Chuck Billy is a hillbilly boy who lives on a farm in Brazil southeastern. Having 8 years and living with his parents in the middle of the country he is a lazy and troublemaker boy. His everyday life is always equal because he escapes from work in farm, and he is always skipping class, strip poor grades, steals guavas from the farm of his grumpy neighbor named (Mr. Lau) and he is often a liar and trickster. But Chuck does this just for being a naughty boy, even though he knew the importance of helping his father at work and needs to improve his grades, he has a pure heart and often strives to do this.

On the farm Chuck has a great friendship with treating all animals as his pets and often protecting them from turning into a "lunch" (as is the case of Griselda Chicken and Torresmo Pig). His best friend at school is his cousin named Zeke; like Chuck, he gets a bad grades, skips class and steals guavas of Mr. Lau's farm, but proves to be very more stupid than Chuck Billy himself. His girlfriend is Rosie Lee, a beautiful and elegant girl who is in love with Chuck Billy since the first day she met him at school. Chuck always jealous of the boys who try to steal his girlfriend Rosie, mainly Genesinho, the rich son of the colonel and the main rival of Chuck Billy.

While not necessarily a character in the main series Monica's Gang he is seen very often appearing with the protagonists Monica, Jimmy Five, Smudge and Maggy, who are his friends.

Chuck without his hat 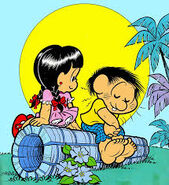 Chuck with Monica and Jimmy 5
Add a photo to this gallery
Retrieved from "https://hero.fandom.com/wiki/Chuck_Billy?oldid=1619800"
Community content is available under CC-BY-SA unless otherwise noted.