To find Katey Zombrex, Clear his name and protect lives in zombie outbreaks (all successfully)

Chuck Greene is the playable protagonist of the video game Dead Rising 2. He is a former motorcycle champion and has a daughter named Katey whom he tries every day to get Zombrex for.

During the comic Road to Fortune, Chuck's past history is shown during the Las Vegas outbreak that predates the game. In this outbreak, his wife is bitten and she in turn bites Katey. Chuck is forced to vacate with Katey in tow and now having to find Zombrex (a medicine that stalls the zombification process) for her.

Chuck first appears in the DLC Case Zero where in he stops his truck at a filling station to get gas, only for the truck to be stolen. He and Katey reach the town of Still Creek where they encounter more zombies and some survivors. Chuck has to construct a motorcycle in order to escape town before the arrival of the military, accomplished through finding the respective parts. When he does, Chuck is confronted by the psychopathic mechanic/zombie killer Jed Wright who tries to add Katey to his "collection". After defeating Wright, Chuck and Katey flee Still Creek. Eventually, they come across the truck and continue onwards to Fortune City.

At the start of Dead Rising 2, Chuck participates in the zombie-massacre gameshow Terror is Reality, conducted by Tyrone "TK" King, to get money to buy more Zombrex. Unfortunately, another outbreak occurs just like in Las Vegas and Chuck carries Katey to safety into the Fortune City emergency shelter managed by Raymond Sullivan who notes that the military will come to clear out the zombies in three days. To make things worse, camera footage of someone wearing Chuck's TiR getup is shown as the perpetrator of the outbreak, thus framing Chuck for the crime. Helped by CURE leader Stacey Forsythe who monitors the security cameras all over Fortune City, Chuck ventures out to get Zombrex for Katey and clear his name.

Aided partly in his search by reporter Rebecca Chang, Chuck finds out that there is indeed a coverup and that none other than TK is behind it. After defeating several of TK's goons and his assistants Amber and Crystal Bailey who had taken Rebecca hostage, Chuck confronts TK in a battle against his helicopter. Defeating TK, Chuck has him detained in the shelter while they await the military aid. Unfortunately, that military aid succumbs to the zombies that are suddenly empowered by mysterious gas.

Sullivan notes that due to the report of the military's failure in clearing out the zombies that they will issue out a firebombing in under 24 hours. In the meantime, Chuck saves Rebecca again after she is taken hostage by Sgt. Dwight Boykin, the now-insane leader of the military squad, whom Chuck defeats. He also goes in to investigate the source of the gas and discovers it is the plot of Phenotrans, the company that manufactures Zombrex. He acquires a laptop of proof but things take a turn for the worse when Sullivan kills Rebecca and reveals himself to be Phenotrans' mole.

Following Sullivan to the roof of the Yucatan Casino, Chuck confronts and defeats Sullivan but is knocked back. Sullivan taunts Chuck by telling him that Phenontrans are the heroes and while Chuck manages to take out Sullivan while handcuffing him to a railing while he's being air-retracted (thus bifurcating Sullivan), Phenotrans escapes with his proof. Chuck then calls up Rebecca's news team to resuce the survivors in the shelter.

Earlier, zombies break into the shelter and the entrance must be fixed. During the chaos, TK is bitten and begs Chuck for Zombrex. If Chuck gives him the Zombrex prior to defeating Sullivan, TK commits one final act of villainy by abducting Katey and Stacey and forcing Chuck to fetch certain items before getting to the Fortune City Arena where the game began. Chuck fights and defeats TK, throwing him to his death amongst a crowd of zombies below, and rescues Katey and Stacey before moving on.

Unfortunately, the victory is short-lived. Chuck is suddenly attacked by a zombified TK and rescued by Frank West who, while being suspicious of Chuck, nevertheless aids Chuck in their infiltration of Phenotrans headquarters. The two defeat several of Phenotrans' personnel before discovering their ally in the system is Frank's old acquaintance Isabela Keyes. However, they are accosted by Phenontrans' manager Marion Mallon and her bodyguard Harjit Singh. While the two defeat Singh, Mallon escapes with Keyes and the facility explodes. Chuck and Frank escape outside with Chuck handing Frank his Zombrex and telling him that "the world needs Frank West".

Outside the game's story, Chuck becomes the second character for Co-Op mode. In-story, he appears as one of the game's (optional) psychopath antagonists. Fitting the what-if/non-canon/alternate dimension nature of Off the Record, this Chuck has been driven mad by the death of Katey and has been killing zombies while becoming an alcoholic. He carries a girl-sized doll he believes to be Katey and drives a yellow Slicecycle like the one he uses at the Terror is Reality game at the beginning of Dead Rising 2.

Frank accidently sets him off by touching the doll and is forced to fight him. Following defeat, Chuck notes how he wouldn't know what he'd do without Katey. Frank picks up the keys to Chuck's trailer but then sees that psycho Chuck has disappeared. Thus, whether the encounter happened at all is never made clear.

Chuck Returns in Dead Rising 3 as a supporting character. After the Fortune City outbreak Chuck became stressful having to find more Zombrex for Katey and became a mob boss to get Zombrex. His daugther Katey decided to run away because she felt like a burden to him. She made her way to Los Perdidos. Chuck spends two years trying to find his daughter. Then a man named Gary tells him where she is. Chuck goes to Los Perdidos to find her and eventually does but only to find her kissing a Mechanic. Chuck gets out of his truck and she is surprised to see him and goes to hug him telling him why she left. Chuck, Katey, Nick, Dick, and Isabela get in the plane and leave but Nick stops the plane to goes and kill General Hemlock and stop the machines fron extracting the King Zombies. After he kills Hemlock Katey contacts him on the transceiver and picks him up with the rest of the group.

Chuck is a devoted father to his daughter Katey, particularly in the time following the death of his wife. He is then willing to resort to almost any means to acquire Zombrex to ensure Katey's continued survival, this being the only reason he participates in Terror is Reality in the first place. When framed for the outbreak, Chuck also shows incredible fortitude and determination to clear his name and bring TK to justice. This also entails his willingness to endure encounters with the psychopathic antagonists and malicious zombies to meet these ends. Due to his past as a motocross champion, he demonstrates considerable skill with motorcycles and vehicles of the like.

He is also shown to be a MacGuyver-esque inventor when it comes to weaponry. In the various maintenance rooms across Fortune City (and the Phenotrans facility in Case West), Chuck devises many unusual Combo Weapons using duct tape and other materials, from the lightsaber-like Laser Sword (made from gems and a flashlight) to the Knife Gloves (Bowie knives duct-taped to boxing gloves).

Chuck with his family. 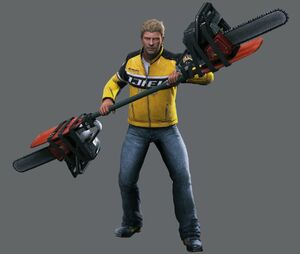 Nick Ramos in a Chuck Greene outfit in Dead Rising 3. 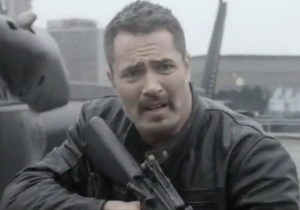 Chuck Greene in Dead Rising: Endgame.
Add a photo to this gallery

Retrieved from "https://hero.fandom.com/wiki/Chuck_Greene?oldid=2184403"
Community content is available under CC-BY-SA unless otherwise noted.