Aid Fei Wu to save secret cave and the Prodigious

Help to stop Yan Woshi before he destroys Shanghai (both succeeded)

Chung, Kang and Jiao are supporting characters in Miraculous World: Shanghai, The Legend of Ladydragon.

They are Chinese boys who live in Shanghai, At beginning they seems a criminals who work for Cash, but then everything fix they become friends of Fei Wu, Marinette Dupain-Cheng and Adrien Agreste.

All three are very brave, as they are not afraid to fight evil on the streets of Shanghai. They also have a great sense of nobility, plus they seem to have feelings for Fei Wu. Even if they don't know their friends are superheroes, it seems like they are in some ways too.

Chung is dark in color, has brown hair and his eyes are reddish brown on which he wears rectangular glasses. She wears a long-sleeved blue shirt, underneath a red shirt with a blue collar and a white video game skull on the front. She is wearing brown sweatpants and convex black and white sneakers.

Kang is tall and lanky with black hair with greyish cyan highlights, he has thick bangs that hang down on the left side of his forehead. He's wearing a pale greyish opal buttoned shirt with pale crimson flowers and a dark vermilion jacket over his unbuttoned shirt, finally he's got black jeans and white sneakers.

Jiao is the chubbiest of the trio with short hair. He's wearing a dark brown sweatshirt with light brown spots, an orange baseball cap turned upside down, and he's wearing dark gray tangelo shorts and black and white converse sneakers. 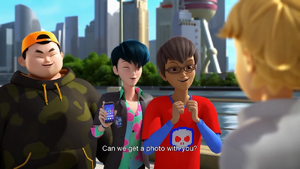 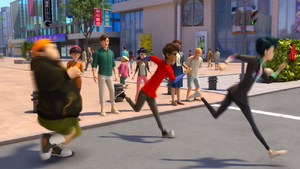 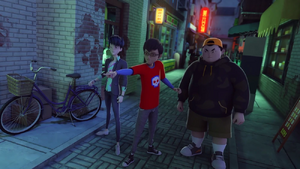 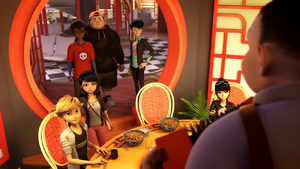 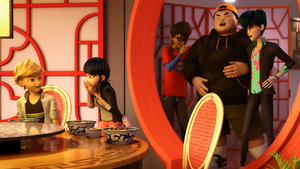 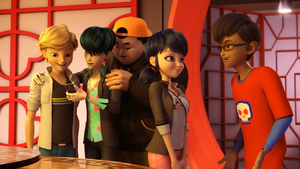