The Guardian of Time

Watch over the balance of the Triforce

Cia is a hero turned antagonist from the spin-off game Hyrule Warriors and the dark half of Lana.

She is voiced by Minako Kotobuki, who also voiced her light half Lana.

As the guardian of time, she was tasked to watch over the Triforce for ages. She had feelings for the young hero Link and became jealous towards Princess Zelda. Later, Ganondorf corrupted her and moved the out the light (which has became Lana) from her heart.

In the Wind Waker continuation of the story, Cia was revived and Lana is conducting a mission to search for her. Lana senses her presence and the group finds Cia at the Temple of Souls. Link, Lana, King Daphnes, and Tetra fought against the doppelgänger who is draining away her power and defeated it. It is revealed that the one stealing her power is Phantom Ganon. When fighting Phantom Ganon, she had the power to subdue dark magic from her foes. After they slain Phantom Ganon, Cia, Link, and Lana returned to Hyrule castle to use the power of the Triforce in order to bring the land back to its normal state. After that, Cia sadly says goodbye to Link, Zelda, and Impa and Lana was waving happily to them. Then, both Lana and Cia continued their roles as guardians of time to watch over the balance of the Triforce.

Cia wields her scepter which is a dark element weapon and can turn into a whip. She uses powerful dark magic and can summon Dark Links to attack her foes.

Cia was initially a jealous, cruel, and a obsessive sorceress. She later became allies with Link and regained her kindness after she was revived. Also, she lets go of her feelings for Link.

Cia is a young sorceress with dark skin, short sliver hair with bangs similar to Lana's but it’s on the right side, and purple and red eyes with black markings under her eye. She wears a red gem alongside with a pearl on her fringes similar to Lana's fringes with a blue gem and a pearl. She is dressed in a revealing black outfit with her cleavage exposed to her navel, golden bracelets, orange feathers on her right shoulder, red markings on her leg, and black and gold boots. On her head is a two pointed hat with a mask (Later destroyed by Midna). According to Midna, her face to similar to Lana's.

As the Guardian of Time, she has lavender hair, lighter skin, and purple eyes. She wears a less revealing white dress with a blue pendant around her neck, a bracelet with a purple gem on her right wrist, and lavender stockings with lavender boots. 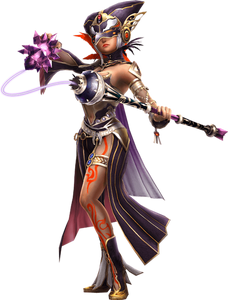 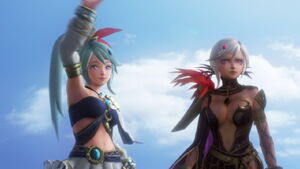 A happy Lana and a sad Cia saying goodbye 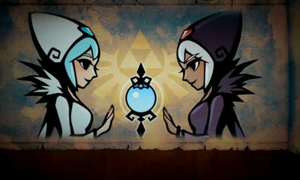 Cia and Lana as Guardians of Time 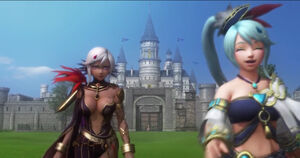 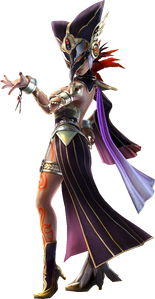 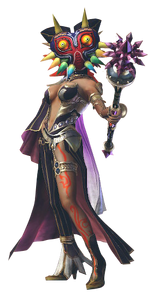