Ciel is one of the five heroines of Tsukihime. Apparently she looks like a senior attending the same school as the main protagonist Shiki Tohno.

She was voiced by Fumiko Orikasa in the anime and Kumi Sakuma in the games in the Japanese version, and by Wendee Lee in the English version.

Ciel (whose real first name is Elesia) was a normal individual born in France to a French father and an Oriental mother. However, unlike those around her, Elesia had a high magic potential, and it was this rare characteristic which ultimately put Michael Roa Valdamnjong inside her as his 17th host body after his 16th host body was killed without having chosen his next host body.

In the process, Ciel became a vampire and killed everyone in her village, the massacre only ending when Arcueid Brunestud arrived and killed her, part of her duty involving killing Roa whenever he reincarnates. However, unlike previous hosts, Ciel returned to life after Roa had moved on to a new host. The secret Vatican agency known as the Burial Agency arrived and captured her, and over the course of a month she was killed repeatedly by the Church, only to rise again on every occasion, a living paradox in that she was both Roa (in that she was a host for him) while Roa was also inhabiting another, making it impossible for her to permanently die until the paradox can be rectified with the death of Roa himself. Eventually, despite their usual views on sorcery, vampires, and the like, the Church decided to use her abilities as a member of the Burial Agency, her main desire and mission being the elimination of Roa to end her eternal existence.

Ciel, despite her appearance, is around 24 years old. She was stated to be born in 1976, and it's noted in the narratives that she was 16 at the time when she became a vampire. The time that it took Roa to manifest in his 17th host after his 16th host appeared is unknown, but it is known that the time between Roa's 15th host and Ciel's appearance was one hundred years. The time lapse between Roa's manifestation in his 17th host and the events of Tsukihime is eight years. Thus, Ciel is around 24 years old in Tsukihime. Though she has only been active for 21, taking in account of the three year coma that it took her to resurrect after being killed by Arcueid.

Ciel's peaceful and kind attitude is mostly a disguise. In reality she is a cold individual with no other objective than that of eliminating Roa. However, after meeting Shiki, her priorities and personality gradually change. Ciel herself states that there's only one person to whom she wants to show her merciful side, that being Shiki. Certain influences of her time as Roa may maintain, as she is known to have a certain mischevious/sadistic streak.

Ciel is a costume fetishist, having designed the outfit she wears when "on duty" personally. She also has a weakness for curry, which has been mentioned in several ways, such as her storing much curry in her apartment. Outside the Tsukihime universe, Higurashi no Naku Koro ni has a character named Chie Rumiko (which is a homonym for Chieru Miko, ie. "Priestess Ciel") who is, with permission by TYPE-MOON, a parody of Ciel right down to her curry obsession.

Ciel is first presented as a senior attending the same school as the main protagonist Shiki Tohno, where she is the president and only member of the tea ceremony club, and also good friends with Arihiko Inui, Satsuki Yumizuka and Shiki himself. Her outward demeanor is that of a calm, friendly, and peaceful person. However, Ciel's true character is later revealed as the story progresses. She is a member of the Burial Agency, a secret organization within the Catholic Church made up of skilled assassins, feared even within the Church itself, known for showing no mercy and willing to do whatever it takes to get their task done even to the point of using forbidden magics and creatures. Her objective in Tsukihime is that of hunting down the heretic Dead Apostle Roa, which while being a direct order from the church is also her own vendetta. In Melty Blood she has been ordered by the church to hunt down a certain vampire.

Ciel is shown to be a very skilled individual who relies in speed and agility. In addition to her exceptional physical skills, Ciel relies on certain weaponry detailed below. Ciel's fighting style in the fighting game Melty Blood is based on that shown in both the Tsukihime visual novel and manga, in the anime adaptation Shingetsutan Tsukihime Ciel's abilities and main weapon were changed.

Ciel's main weapon as an Executor of the Church are the Black Keys. The Black Keys have the appearance of sword hilts with blades materialized by sorcery, though the Keys are treated more as daggers than swords and can be thrown. If the Keys manage to hit the shadow of a target, the target will be pinned down and unable to move as the shadow cannot separate from the body, and in such a case only Ciel can remove the Key pinning the shadow. Ciel has access to a huge number of Black Keys, as she can create them using pages from the Bible.

Ciel has a body with extremely high physical and magical potential. She can jump to the top of lamp posts with ease, leap from rooftop to rooftop and match the speed of vampires. With the training of the Burial Agency, Ciel can match most vampires and perhaps some lower ranking Dead Apostles alone. Although she has super-human strength, speed and reflexes, most Dead Apostles are still significantly stronger than she is; however, with the Seventh Holy Scripture, Ciel still poses a high threat to any Dead Apostle and perhaps even Arcueid. Her immortality is precisely why she is the #7 member of the Burial Agency, the seat reserved for one that acts alone, as she is unkillable until Roa's soul ceases to exist. This does not mean Ciel can just win all battles by herself; Shiki's Mystic Eyes of Death Perception can still erase her existence, and once she is killed once by an enemy, she can simply be killed repeatedly to prevent her from becoming a threat. She also has the knowledge Roa had, as she was his 17th host. This allows her to use magic along with the sacraments of the sacred church. Commonly, this magical ability manifests in her control of the Mystic Eyes of Whisper, allowing her to manipulate people to a limited extent, hypnotizing them into not doubting the words that she says, unless there is direct evidence otherwise. It was this technique that allowed her to infiltrate Shiki's school. 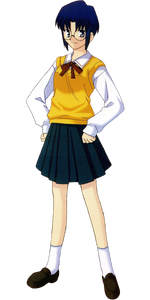 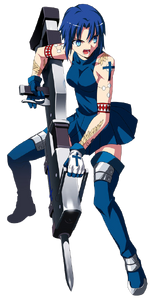 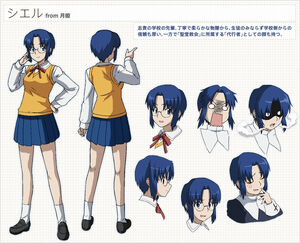 Ciel (Carnival Phantasm)
Add a photo to this gallery
Retrieved from "https://hero.fandom.com/wiki/Ciel_(Tsukihime)?oldid=2125593"
Community content is available under CC-BY-SA unless otherwise noted.