Cilan (Japanese: デント Dent) is a former traveling partner of Ash Ketchum. He made his debut in Triple Leaders, Team Threats!.

Cilan made his debut in Triple Leaders, Team Threats! running errands in his hometown of Striaton City. He was intrigued to see an Axew and remarked that it and its trainer Iris seemed to be perfect partners. He then noticed Pikachu and examined it excitedly, having never seen one before. When Ash Ketchum explained he wanted to challenge the Striaton Gym, Cilan happily showed them the way. He leads them to a café and sits them down at a table, despite their obvious confusion. After toying with Ash for a bit, Cilan reveals that he, along with his brothers Chili and Cress, are the Gym Leaders at the Striaton Gym. After introducing their Pokémon to Ash, he and his brothers were shocked to hear he wanted to battle all three of them, but they happily accepted his offer. Cilan served the role as the judge for his brothers' battles, and finally faced off as Ash's final opponent. After a heated battle with Cilan, which carried on to Dreams by the Yard Full!, Ash wins and gets the Trio Badge. After the battle, Cilan meets up with Ash at the Pokémon Center and begs him to tell him his battle secrets for future reference as a Connoisseur. After spending the day with Ash and Iris, Cilan decided to accompany them on Ash's journey, serving as the navigation as well as the cook as revealed in Snivy Plays Hard to Catch!.

In A Home for Dwebble!, the group encounters a wild Dwebble collecting rocks to make its shell. After it is stolen by a group of thieving Dwebble, Cilan sends his Pansage to follow them. With no luck, the group approached the Dwebble with empathy, but this only scared it and caused it to lash out at their Pokémon. It ends up hitting Pansage with a stray rock, which later ends up making him ill. Once recovered, they try to help Dwebble retrieve his shell which ultimately failed in a 3-to-1 battle. Cilan hatched a plan to lure the Dwebble away with Pokémon food so that the Dwebble to battle them one at a time. The plan was a success and the Dwebble urged to be a part of Cilan's team, who was happy to have it on board.

In A Connoisseur's Revenge! Cilan revealed that he is an Class A Pokémon Connoisseur after Ash found a Connoisseur's shop in a Poké Mart. After doing some shopping, Cilan and Iris find Ash in a different Connoisseur shop belonging to a C-Class Connoisseur named Burgundy. Burgundy instantly recognized Cilan who stated that he had defeated her in a gym battle some time before meeting Ash. Seeking total revenge for her previous defeat, Burgundy challenged Cilan to a battle to prove she was a better Connoisseur, putting Ash's Pokémon on the line. Cilan accepted the battle, as well as responsibility for whatever might happen to Ash's Pokémon as a result of the battle, much to Ash's dismay. However, Cilan managed to defeat Burgundy without much trouble, and she decided to start her own journey. As the group was seeing Burgundy off, Cilan stepped forward and offered a few words of encouragement to his new rival, who still swore revenge on him and ran off.

He revealed that he has quite a knack for scientifically thinking in A Night in the Nacrene City Museum!, as well as in A UFO for Elgyem! when he, Ash, and Iris witnessed a UFO landing. This led them to the home of Professor Icarus, a scientist in UFO engineering who Cilan admires.

Cilan showed off some of his surprising kills as a fisherman in Facing Fear with Eyes Wide Open! where he fished a Stunfisk out of a lake that was preventing Ash and Oshawott from retrieving a water herb that would heal their poisoned Pokémon, using a lure that resembled himself. Though Stunfisk put up a struggle, Cilan confused it by twirling it around in the air with his fishing rod before he slammed it to the ground. Cilan wearing his conductor hat.This left it unable to battle and he captured it.

Cilan's fishing skills were later put to use again in A Fishing Connoisseur in a Fishy Competition! when he managed to hook a Basculin during a fake fishing competition that turns out to be held by the Team Rocket trio.

In Reunion Battles In Nimbasa!, Cilan signed up to participate in the Club Battle tournament in Nimbasa Town along with his friends. He also reunited with Burgundy who was still determined to get her revenge. It was revealed that his first opponent would be Trip and their battle began in the next episode. He chose Dwebble to go up against Trip's Gurdurr. Initiating all of Dwebble's skills, Cilan was able to defeat him and advance to the second round of the competition, much to Burgundy's dislike. In The Club Battle Hearts of Fury: Emolga Versus Sawk!, his second round opponent was Luke. Cilan chose Stunfisk to go up against Luke's Larvesta and lost, thus knocking Cilan out of the tournament in the second round.

In Crisis from the Underground Up! and Battle For The Underground! Cilan revealed he had an extensive knowledge of trains, and had once met Emmet and Ingo at a train convention. He even donned a black conductor's hat similar to Ingo's. Later when Team Rocket had stolen all of the Pokémon at the Pokémon Center, Cilan used his knowledge to become a major asset for Emmet and Ingo and help rescue the stolen Pokémon.

Cilan was able to meet up with his brother Chili again in BW058. Chili told him that he came to view the progress of his studying and immediately asked him for a battle to which Cilan accepted. He was able to easily able to defeat Chili's Pansear with his Pansage which provoked a fight between the High Temperature Pokémon and its Trainer. He later learned from Cress that Chili had run away from the gym because he criticized his battling style. Cilan decided that he would help Chili find his own battle stye.

While Cress said that Chili needed to not focus on offense so much and focus more on defense, Cilan thought it would be better for him to continue to focus on his offense under the premise of "a good offense is a good defense". He believed that teaching Pansear SolarBeam would be a good way for Pansear to defend itself against Water-types and it successfully learned the move with the help of Pansage. 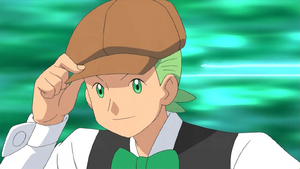 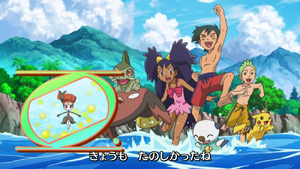 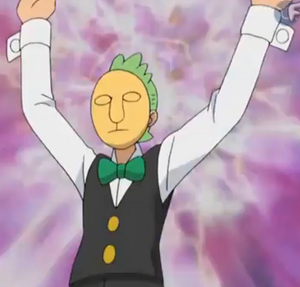 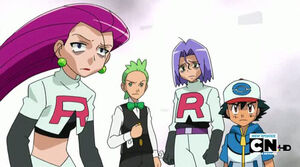 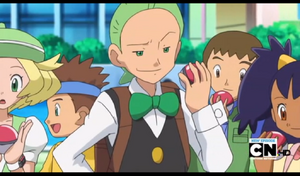 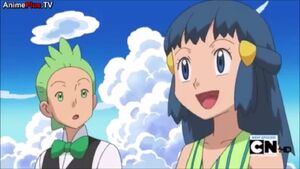 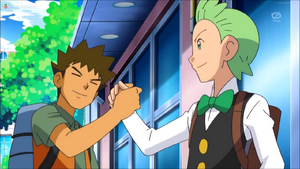 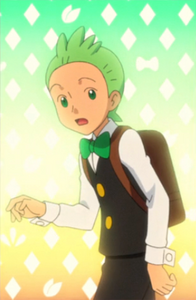 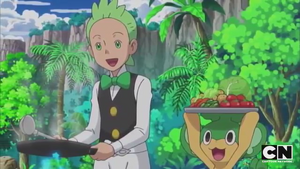 Retrieved from "https://hero.fandom.com/wiki/Cilan_(Pokémon)?oldid=2304937"
Community content is available under CC-BY-SA unless otherwise noted.