The Troll (By most of his students)

He was portrayed by Nick Gillard, and voiced by Tom Kane in the Revenge of the Sith video game, who also voiced Yoda in Star Wars: The Clone Wars, Takeo Masaki in Call of Duty zombies, Professor Utonium in The Powerpuff Girls, James Gordon in Batman: Arkham Asylum.

Cin Drallig was a master swordsman who served the Jedi Order. Drallig rose to the rank of Jedi Master and led the Jedi Temple Guard during the Clone Wars. As a Master, he was a teacher of combat who passed his skills onto new generations of. He earned the nickname "the Troll" from other members of the Jedi Order.

During the Clone Wars, the Jedi Temple was bombed by Barriss Offee. Before the perpetrator had been caught, the Jedi led an investigation to determine who was behind the attack. Anakin Skywalker approached Drallig, who was standing guard with the Temple Guard at the gates of the Jedi Temple, where protestors were demonstrating against the war and the Jedi Order's involvement in it. Skywalker showed Drallig a image of their then-suspect, Jackar Bowmani, and asked the Jedi Master to be on alert for him. This led to the suspect's wife, Letta Turmond, being taken into custody after spotting the holographic image, and the Jedi ultimately learned that Turmond was part of the plot to attack the Jedi Temple.

The Temple was later attacked by Rackham Sear of the Confederacy of Independent Systems. During the attack, Drallig led two Temple Guards in securing the quarters of the Jedis. He arrived just in time to cut a small explosive drone in half before it detonated in a room with several younglings. He ordered the guards to stay with the younglings and destroy any more explosives that entered the area. Drallig then joined Masters Mace Windu and Obi-Wan Kenobi, reporting to them that there were the Younglings were safe, but that there were explosions throughout the Temple and that the source was unknown. Master Depa Billabaand Initiate Caleb Dume ended the attack by confronting Sear on the roof of the Temple, where he committed suicide by leaping off the building.

Fall of the Jedi Temple

At the end of the war, Skywalker turned to the dark side of the Force and became Darth Vader, apprentice to Supreme Chancellor Sheev Palpatine—secretly Darth Sidious, the Dark Lord of the Sith. Vader attacked the Jedi Temple with the 501st Legion of clone troopers, while Palpatine issued Order 66 to force the clones to turn against the Jedi Order. Drallig fought to defend the Jedi Temple alongside Padawans. The three Jedis were eventually confronted and slain in lightsaber combat by Darth Vader.

An experienced Jedi Master with a formidable reputation, Drallig acted as one of the primary lightsaber instructors for the older Jedi initiates and Padawans, as well as occasionally mentoring full knights seeking to expand their sword skills. As such, Master Drallig was an excellent, if harsh, teacher, earning him the nickname of "The Troll" by many younger Jedi.

As the primary commander of the Jedi temple security, Drallig was also a capable strategist, many times having to lead the defense of the temple against opposition, especially nearing the end of the clone wars.

As the primary lightsaber instructor for the Jedi order, Master Drallig was an immensely skilled swordsman who had been trained in combat by Yoda himself. Drallig's skill was such that, when Count Dooku was training the cyborg Jedi hunter General Grievous, He named Drallig among the currently active Jedi of whom Grievous would most unlikely be able to outmatch in a duel. Despite his immense skill and formidable reputation, He was nonetheless killed in lightsaber combat by Darth Vader during the attack on the Jedi Temple, though only after a fierce duel between the two.

For his brief appearance in Star Wars: Episode III Revenge of the Sith, Cin Drallig was portrayed by prequel trilogy stunt coordinator Nick Gillard, whose name was used as the basis for the character's name. Drallig was later voiced by Robin Atkin Downes in Sabotage, the seventeenth episode of the Clone Wars: Season of the animated television series Star Wars: The Clone Wars. 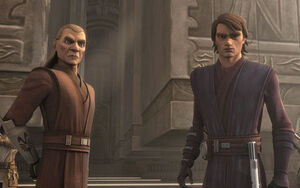 Cin Drallig with Anakin in Star Wars: The Clone Wars

Cin Drallig moments before being killed by Darth Vader in Star Wars Episode III: Revenge of the Sith