Cinderella (Popelka) is the main protagonist of the 1973 film, Three Wishes for Cinderella. She is a poor young woman from an unnamed Czech town who marries the Prince.

She was portrayed by Libuše Šafránková.

Cinderella's stepmother has the village in a frenzy preparing for the arrival of the king and queen, who will be stopping en route to their nearby castle. Cinderella takes the blame for a kitchen boy's accident, prompting her stepmother to berate her as well as her late father. The angered Cinderella snaps back at her, for which she is punished by having to separate lentils and ashes mixed together in a bucket. As she settles down to work, her friends, a flock of white doves, come in to separate the mixture for her. Freed of her punishment, Cinderella visits the stable to see her white horse, which she used to ride in the forest with her father as they hunted with crossbows. A lookout cries that the royal party approaches and everyone gathers to greet them, except Cinderella, who is forbidden to attend as the Stepmother wants to showcase her own less attractive daughter, Dora, since the Prince is expected to marry soon.

Cinderella uses the distraction to slip away with her horse, visit her pet owl and enjoy the wintry forest. Her ride is cut short as she happens upon the Prince and his companions, Vítek and Kamil, hunting in the forest. They spot a doe struggling in the snow, but the Prince's crossbow shot is foiled by a snowball thrown by Cinderella. They give chase and finally catch up with her, laughing at her as an impudent child. She escapes and mounts the prince's horse, Dapples. They chase her with renewed urgency since Dapples has a reputation of being unmanageable. To their surprise, she rides him easily before transferring to her own horse and sending Dapples back to the Prince.

The Stepmother uses the royal visit to wrangle an invitation to the ball from the King, who reluctantly offers it out of politeness. On their way to the castle, they're joined by the Prince's party. The King, annoyed by his son's youthful irresponsibility, says the Prince must get married.

The Stepmother sends Vincek the servant to town to purchase fabrics and supplies to make new dresses for her and Dora. On his way, he sees Cinderella forced to wash laundry in an icy stream. Feeling sympathetic but helpless, he promises to bring her a gift of whatever hits him on the nose. After hearing his father's plans to force him to become engaged at the ball, the Prince heads back to the woods. He sees Vincek asleep in his sled, the horses drawing it home. Using his crossbow, he mischievously shoots a bird's nest from a tree branch, which falls on Vincek's face. Vincek finds a twig with three hazelnuts in the nest and decides that will be Cinderella's gift. Cinderella likes the present although her stepmother derides it as "fit for a squirrel."

The Stepmother and Dora realize they had forgotten to get new jewellery and go to town to choose it themselves. The Stepmother punishes Cinderella for impertinence again by forcing her to separate corn kernels from lentils. Once again, the doves enter to help Cinderella. She visits her owl, wishing she had the same freedom to come and go. She wished she had a disguise so she could venture out. One hazelnut drops from the twig and magically opens to show a complete hunter's outfit within. Suitably clothed, Cinderella goes into the woods, where she sees the Prince and a large hunting party. The lead huntsman shows a large, bejeweled ring that the King promises to the first hunter to shoot down a bird of prey. The hunters, including the Prince, are unable to do so. Cinderella shoots it down, then shoots the arrow from the Prince's hand. He's impressed by the "young huntsman" and puts the ring on Cinderella's gloved hand. He asks her to do better by shooting a pine cone from the top of a tree. She does then slips away as he marvels at her marksmanship. Chasing after her, he finds her high in a tree in her own clothes, refusing to tell where the "young huntsman" went.

The Stepmother and Dora leave for the castle ball. Visiting her owl, Cinderella wishes she could go then wonders if she could get another outfit. A second hazelnut opens to reveal a lavish ball gown. Her horse is mysteriously saddled with an ornate sidesaddle. Riding to the castle, she makes her way to the ballroom, turning heads all along the way. Donning a veil, she greets the Prince, who was tired of being pursued by the female guests. He finds the veiled stranger mysterious and charming. The King and Queen are amazed at his softened manner. She refuses to accept his proposal unless he can solve a riddle, which referenced their earlier meetings. She runs out and the Prince gives chase, following her back to her walled village. The villagers first mock the handsome stranger for seeking a beautiful princess in their midst then realize who he is. He has the women try on the slipper Cinderella had lost. The Stepmother and Dora return. Seeing the Prince, they scheme to snare him, tying up Cinderella and stealing her clothing. When he asks that the disguised Dora try on the slipper, the Stepmother snatches it and they ride away in a sled. The Prince chases until the sled falls into a small pond. Seeing that it's actually Dora, he takes the slipper and returns to the village.

Cinderella visits her owl again. She's ecstatic to find that the final nut contains a wedding dress. Donning it, she rides out on her horse, surprising the village and the Prince. The slipper fits and she wants to return the King-of-the-Hunt ring, but he slips it back on her finger. She offers the riddle again and the Prince remembers his encounters with her alter egos. He proposes to Cinderella, who wordlessly accepts, with the entire village cheering for her. 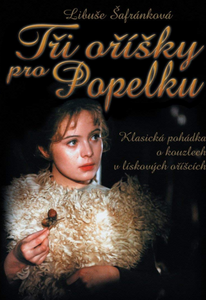 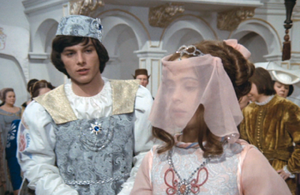 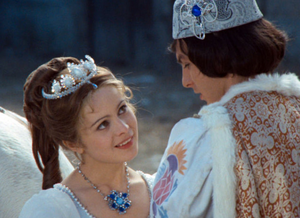 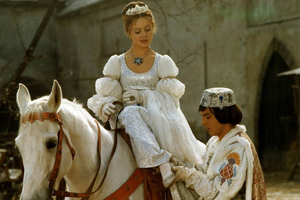 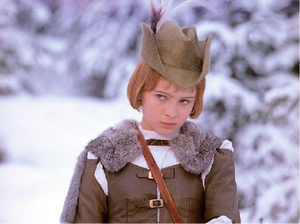 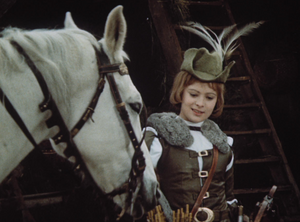 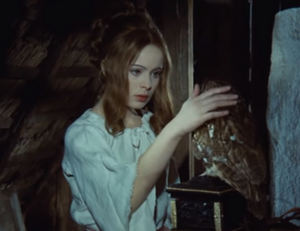 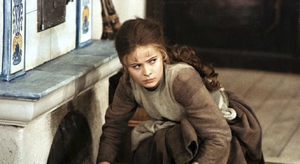 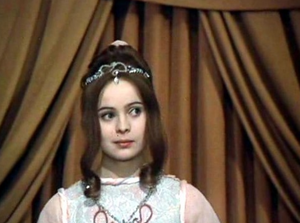 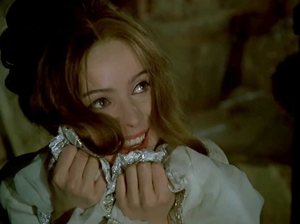 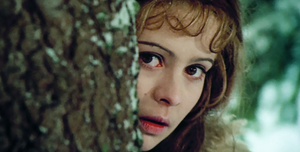 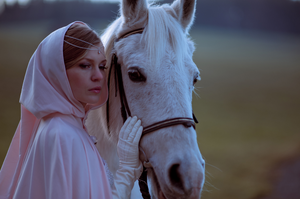 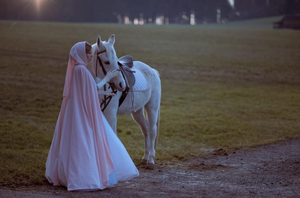 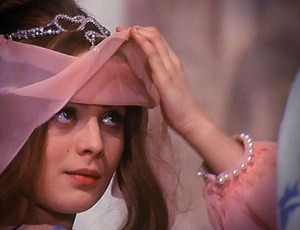 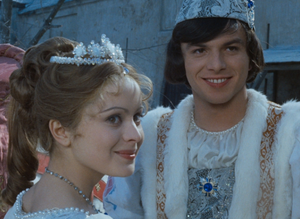 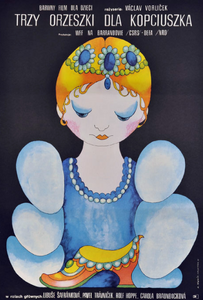 The Polish cover, advertizing her to look more like a Disney copy. 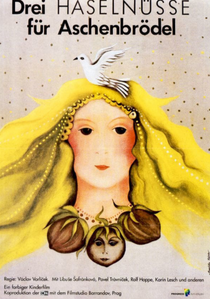 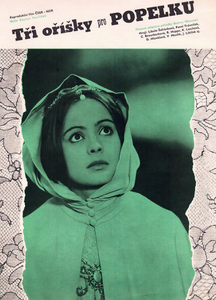 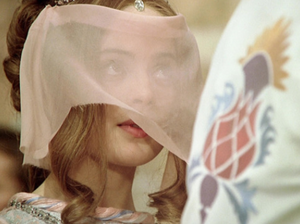 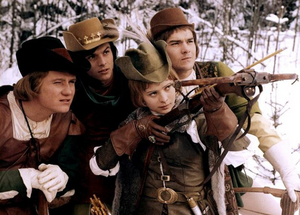 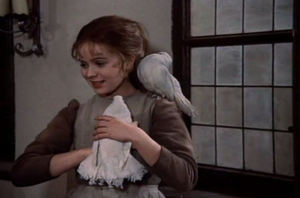 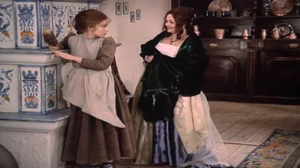 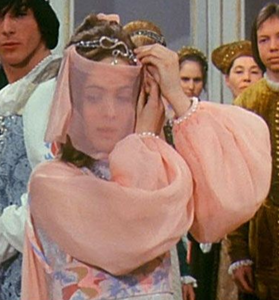 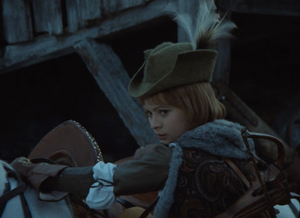 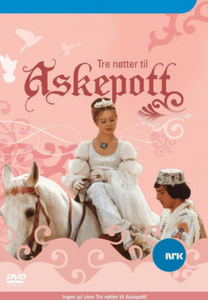 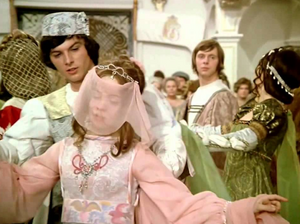 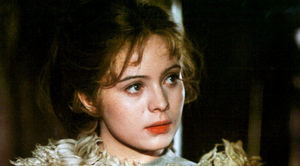 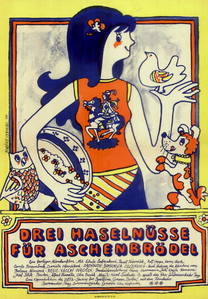 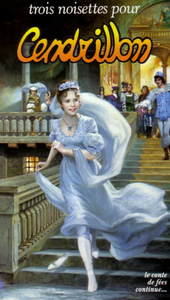 Add a photo to this gallery
Retrieved from "https://hero.fandom.com/wiki/Cinderella_(1973_Czech)?oldid=2215446"
Community content is available under CC-BY-SA unless otherwise noted.