Kid
Cindy Lou Who is the deuteragonist of the computer-animated Dr. Seuss' The Grinch. She is a sweet young girl from Whoville.

She's voiced by Cameron Seely, who was in the movie The Greatest Showman.

This version of Cindy Lou Who is different than her 1966 and 2000 version. For example, Cindy-Lou Who plots to capture Santa Claus to thank him for helping her single mother every Christmas, which would interfere with The Grinch's plans.

Like her previous version, she does love Christmas, but her single mother has been working so hard with her and her twin brothers that she decides to write a letter to Santa wishing for her mother to be happy and able to spend time with them on Christmas.

She's a very sweet, kind, helpful and fun-loving person who cares about others more than herself. Like any daughter, she loves her family and wants to make sure that her mom is still happy on Christmas.

Unlike her 2000 version, she never mentions her father since he was never seen. Also, she's the first person to hug the Grinch (kind of similar to her live-action counterpart who gave the Grinch a kiss on the cheek after he redeemed himself).

Cindy Lou is a small, slender, six year old Who girl with fuzzy peach skin, blue eyes and blonde hair in the form of a bob-cut. Her hair braids are tied to red hair bows like antanees. She wears a pink sweater with a red heart on it, a yellow pantyhose with pink stripes, and pink boots. While going outside, Cindy Lou wears a hot pink winter coat with a frilly dress underneath and a long pink scarf with light pink stripes around her neck. During bedtime, she wears a pink nightgown and white fuzzy slippers. For Christmas dinner, Cindy Lou wears a red dress with white cuffs on the sleeves, white lace collar and bottom, pink tights, red Mary-Jane shoes, and a pink belt around her waist.

While the Grinch was shopping for foods, Cindy Lou Who notices that her mother Donna is overworked by trying to take care of her and her twin infant brothers, Buster and Bean.

She decides to send a letter to Santa Claus to help her mother at first, but after encountering the Grinch, who sarcastically says that she'll have to talk to Santa face-to-face about it, she decides to try and trap Santa with the help of her friends.

With Christmas just around the corner, all the Whoville festivities force the Grinch to recall his sad childhood spent mostly alone and unwanted in a run-down orphanage.

The Grinch soon decides that he'll steal Christmas from Whoville to assuage his distress and acquires a fat reindeer whom he calls Fred to help him pull a sleigh that he stole from his neighbor, Mr. Bricklebaum. After a test run, the Grinch discovers that Fred has a wife and child. With a heavy heart, he lets Fred go back to them.

On Christmas Eve, Cindy Lou and her mother are talking about what Cindy Lou wants for Christmas, but Cindy Lou tells her that she's not telling, but she know that whatever she wants, it'll make them very happy. After her mother goes to bed, she quietly sets a trap so she can finally see Santa Claus and talk with him.

He soon encounters Cindy after falling into her trap, and Cindy tells him that she doesn't want presents because she wants to help her mom on Christmas since she knows that her mom is always working so hard and wants her to be happy.

Her request is to help lighten her mother's workload and her kind advice about listening to the Whos' singing to take his sadness away, touches the Grinch's bitter heart. Cindy then hugs the Grinch, which the Grinch was shocked and surprised at since he's never been hugged before. She also tells him "Thank you, Santa. Good night" and then goes back to bed. Nevertheless, the Grinch carries on with his mission.

Then, Cindy Lou realizes that it was her fault because she caught Santa and thinks that she made him mad by taking away their Christmas, but Donna tells her that Christmas is more than just presents and that Cindy Lou's the best thing that ever happened to her, which makes Cindy Lou really happy. Later, the Whos join together by singing "Welcome Christmas".

Then, the Grinch and Max hear the singing down in Whoville before the Grinch dumps the sleigh and is puzzled to see that they're celebrating Christmas without presents, despite his theft.

After remembering Cindy Lou's advice and listening to their song, his small heart triples in size, causing him to double over into breathless joy and wonder. Then, the sleigh almost falls off Mount Crumpit and the Grinch tries to save it. In the nick of time, Fred and his family come to his aid.

After securing the sleigh, the Grinch and Max go back to Whoville to return the stolen items and the Grinch admits his theft to the Whos and apologizes before going back to his cave. Feeling sorry for the Grinch, Cindy Lou comes to his house and invites him to celebrate Christmas at her house since she forgives him and tells him that no one should be alone on Christmas, which surprised the Grinch.

Then, The Grinch awkwardly attends since he haven't been invited before and Cindy Lou is very happy that he came and wants him to feel welcome. When seated down for dinner, the Grinch confesses that it wasn't really Christmas he disliked, but being lonely and his bitterness over being neglected. He also thank Cindy Lou for changing his life with of her kindness, and Cindy Lou's mother hugs her, saying "that's my girl." 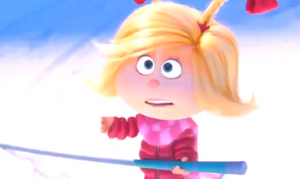 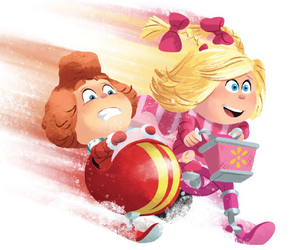 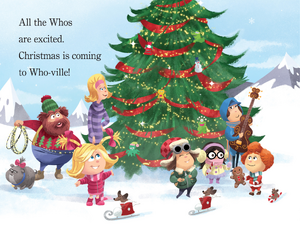 Cindy is happy that Mr. Grinch came to Christmas dinner at her house

"If you just close your eyes and listen, all of your sadness will go away."

Cindy giggles while Max licks her in the face